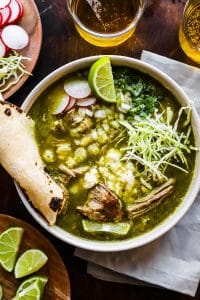 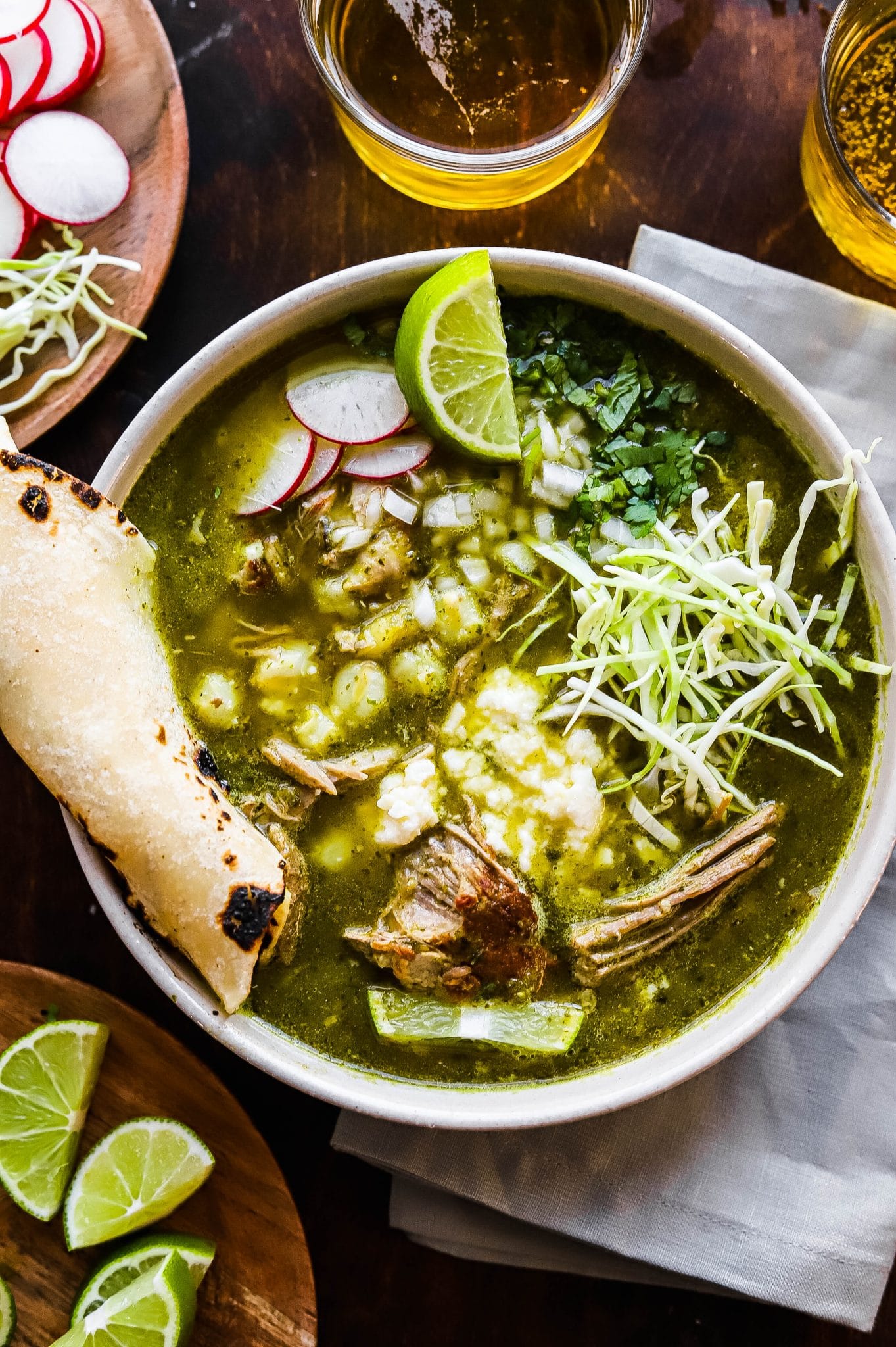 Pork pozole verde is a rich and flavorful Mexican stew loaded with tender braised pork shoulder and hominy in a green chile broth. Pozole has always been one of my favorite comfort foods and this version is so, so good! It’s a hearty and warming Mexican stew, perfect for any time of year. 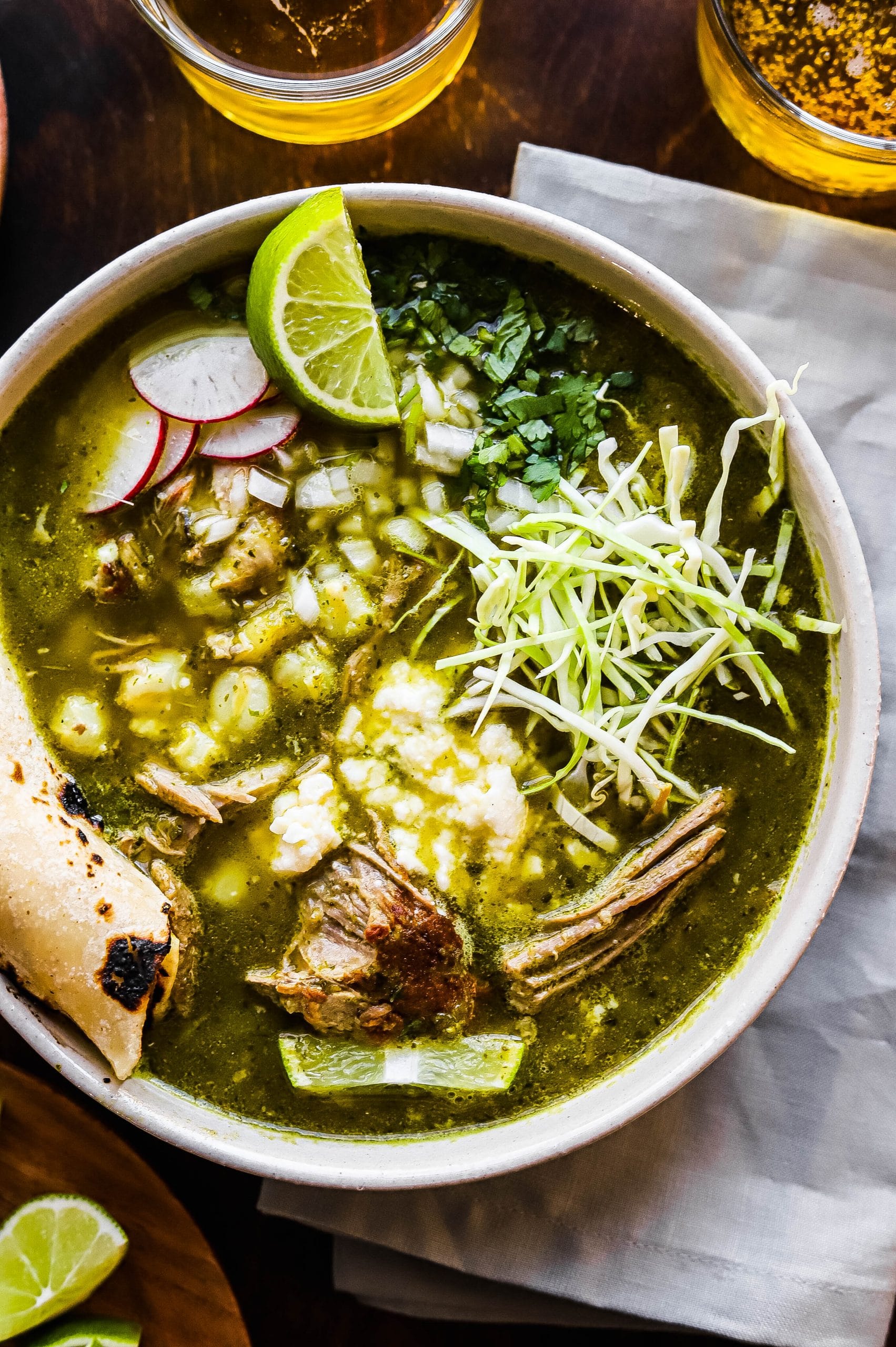 Pozole is a meat and hominy stew, traditional to Mexican cooking. It’s traditionally made with pork and served with shredded cabbage or lettuce, onions, chile peppers, cilantro, radishes, avocado, and/or lime.

Pozole is a typical dish in various states such as Nayarit, Sinaloa, Michoacan, Guerrero, Zacatecas, Jalisco, and Morelos. It’s been around since the 16th century or so, and originated in Aztec culture as maize (corn) was a sacred plant and they created this dish to observe special occasions.

Pozole verde, ‘green’ in Spanish, is made with a green chile and cilantro broth. There is also a red pozole where the broth is red due to the use of dried red chilies. I have a killer Chicken Pozole Rojo (red) recipe if you’d like to try both. 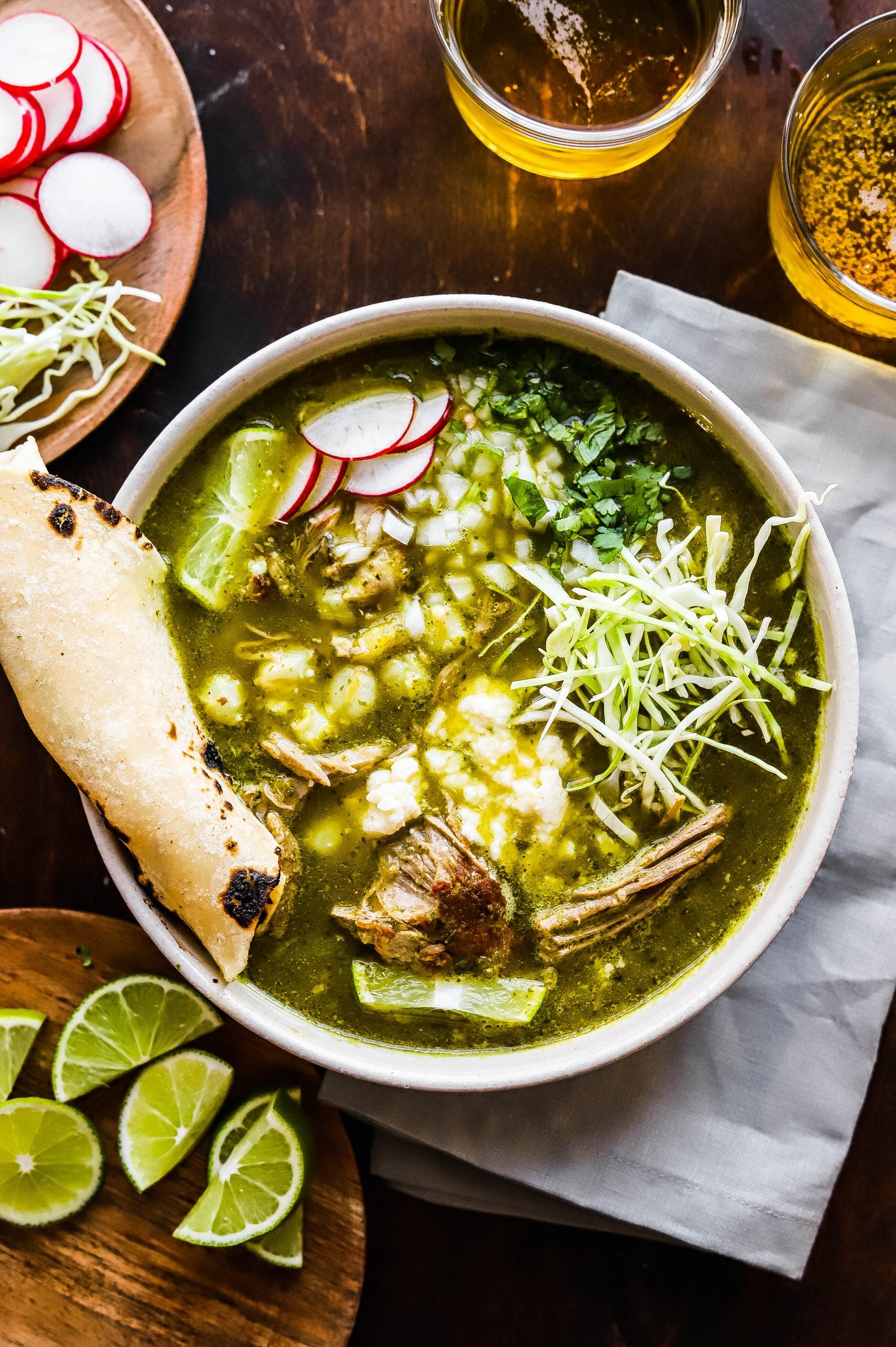 How to Make Pork Pozole Verde

I love making pork pozole verde on Sundays because I have time to really let the pozole simmer. This isn’t a difficult recipe to make, but it does take some time. It’s a mostly hands-off recipe making it easy to get on the table. It also freezes beautifully! 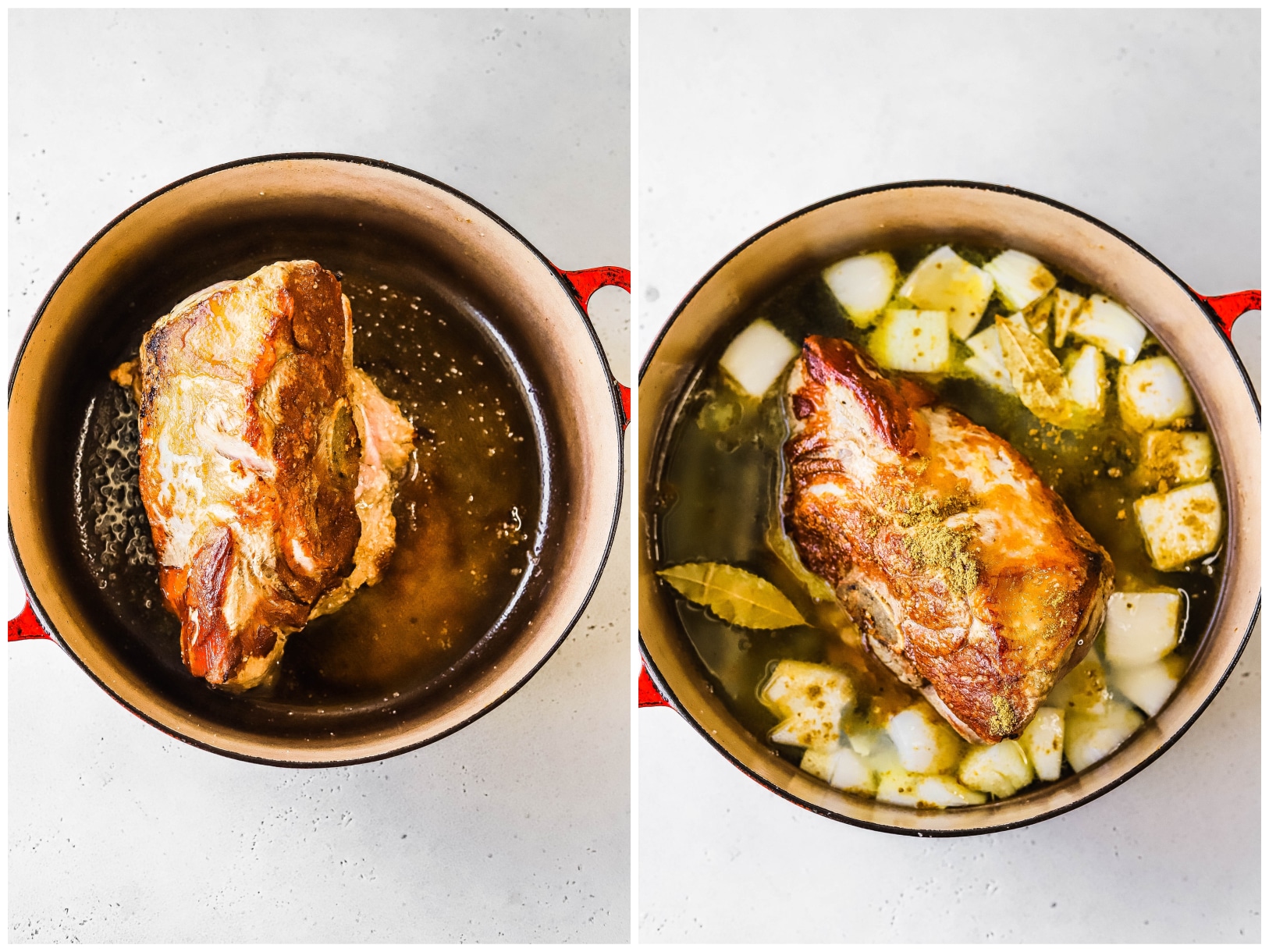 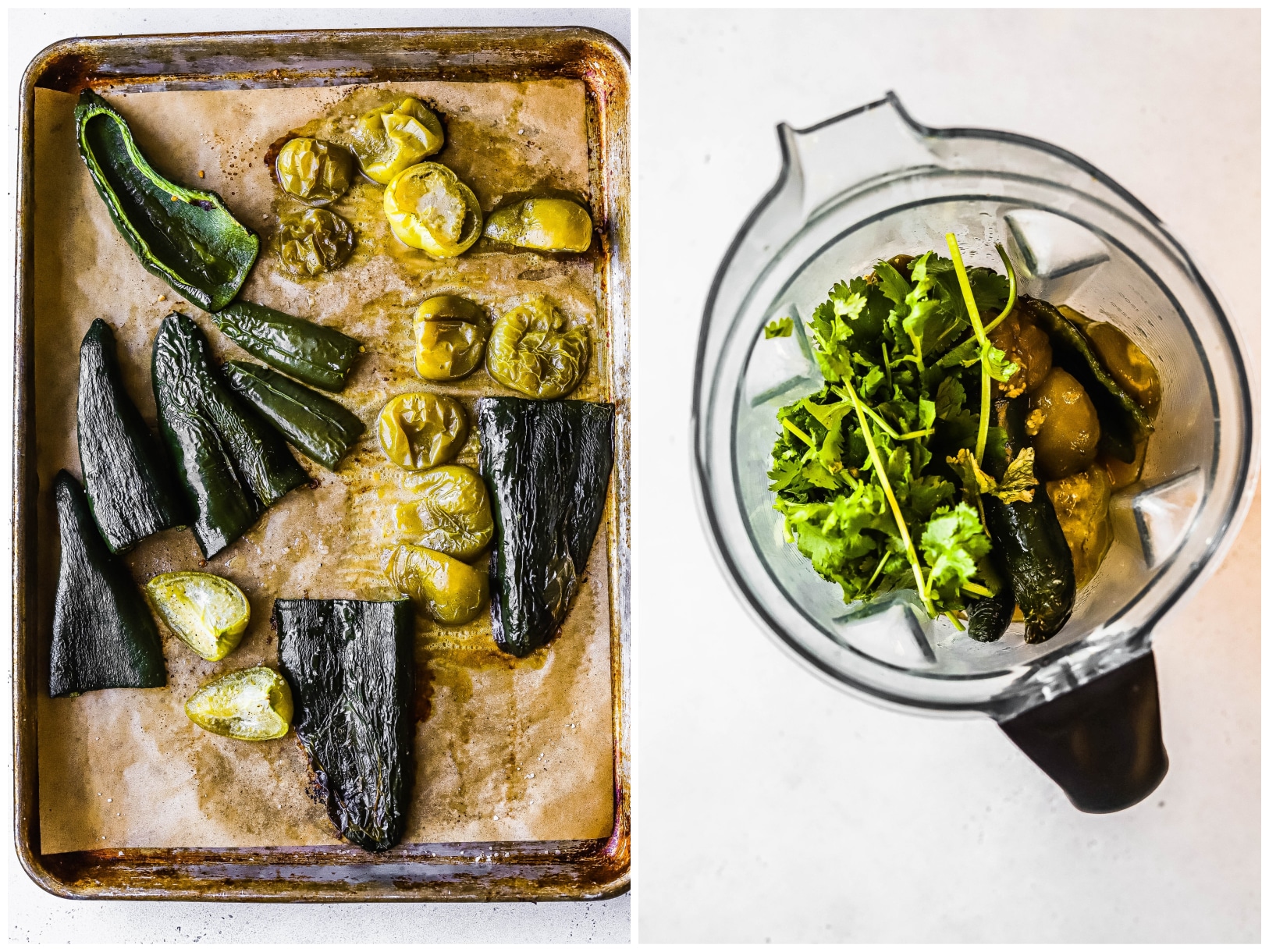 While I love making this recipe in my dutch oven, you can make it with a slow cooker.

I love this recipe because it makes a pretty large batch! It freezes beautifully and I love storing a stash in the freezer for a quick dinner option.

Other Classic Mexican Recipes to Try