Carnitas are HANDS DOWN my favorite taco filling. Going a step further to make beer-braised carnitas tacos is just * chefs’ kiss*. I have been making this recipe for YEARS and it never fails to impress. The tender and fatty crispy carnitas are just so perfect with the pickled onions, salsa verde, and cotija. I honestly can’t think of a taco recipe that I love more (and I LOVE TACOS). Enjoy!

What are beer-braised carnitas?

Well, first, braising is a combination cooking technique that features both wet and dry heat. First, you sear the pork in the pan for flavor and color and then you add liquid to the pot and transfer the covered pot to the oven. In the oven, the pork cooks slowly at a lower temperature. The resulting pork is exceedingly tender. Braising is particularly effective for tough cuts of meat (brisket, chuck, pork shoulder, etc). Cooking tough meats low and slow in liquid allows the muscle tissue and collagen to slowly break down. Any liquid can be used to braise (wine, stock, water, etc), but I love beer for this recipe!

Carnitas is a dish of Mexican cuisine that originated in the state of Michoacan. Traditionally, pork butt is braised in broth or fat. Since cooking 5 lbs of pork in lard seems excessive, I opted for both lard and beer. 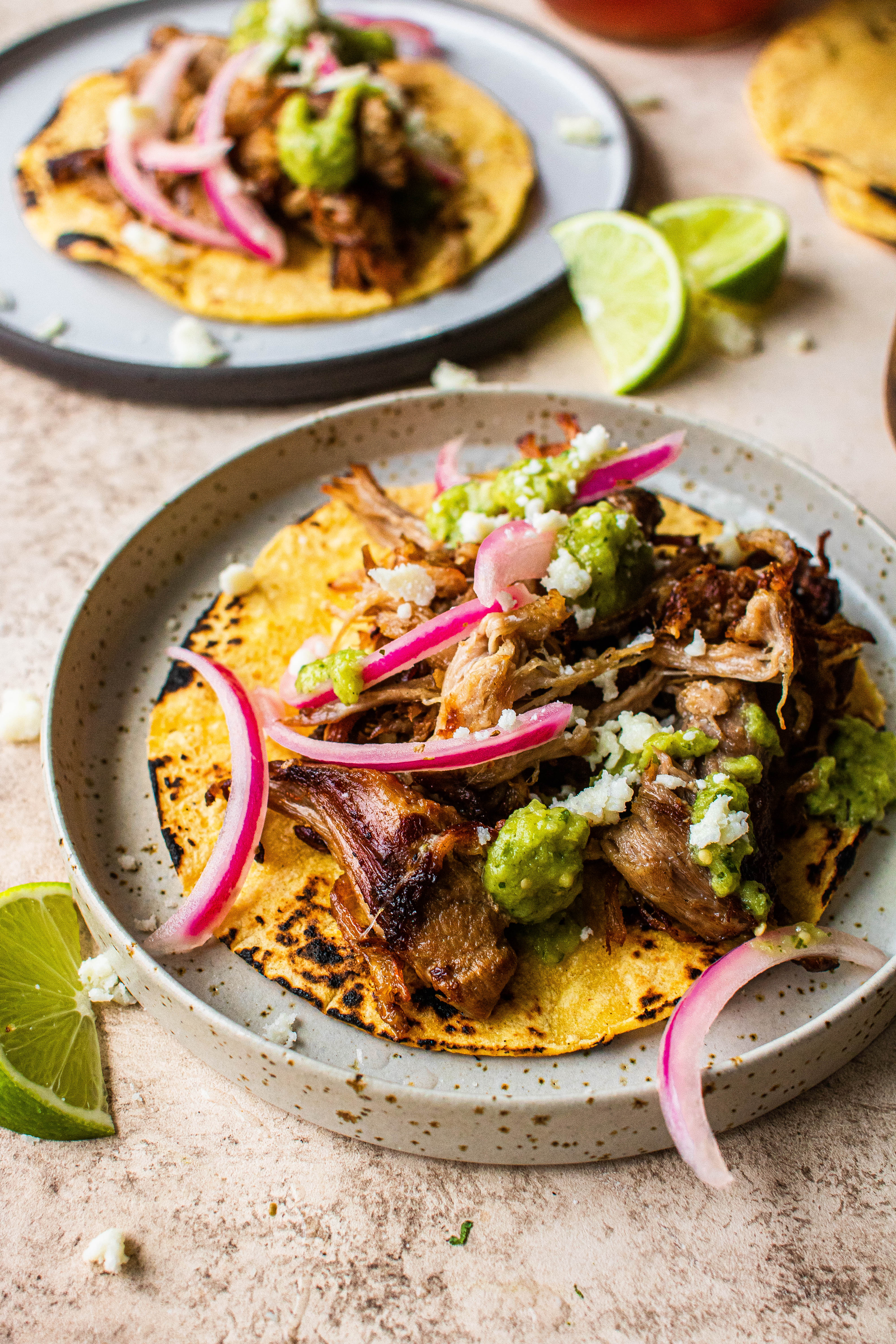 Why use bone-in pork?

Bone-in pork really adds so much flavor to the meat while it cooks. Pork on the bone contains collagen and marrow that slowly break down as you braise the meat. I personally find that bone-in pork is cheaper than boneless, too. You can absolutely use boneless pork butt if that’s easier! If you do use bone-in, just be careful to cut around the bone when you cut the meat into chunks.

What type of beer is best for braising?

The beer-braised carnitas benefit from a beer that doesn’t have a strong hoppy flavor. This means IPAs and Pale Ales are definitely out. The longer you cook beer with a heavy hop character, the more bitter it becomes. I tend to opt for lagers or amber ales/lagers or Mexican beers like Modelo, negro Modelo, Pacifico, etc. 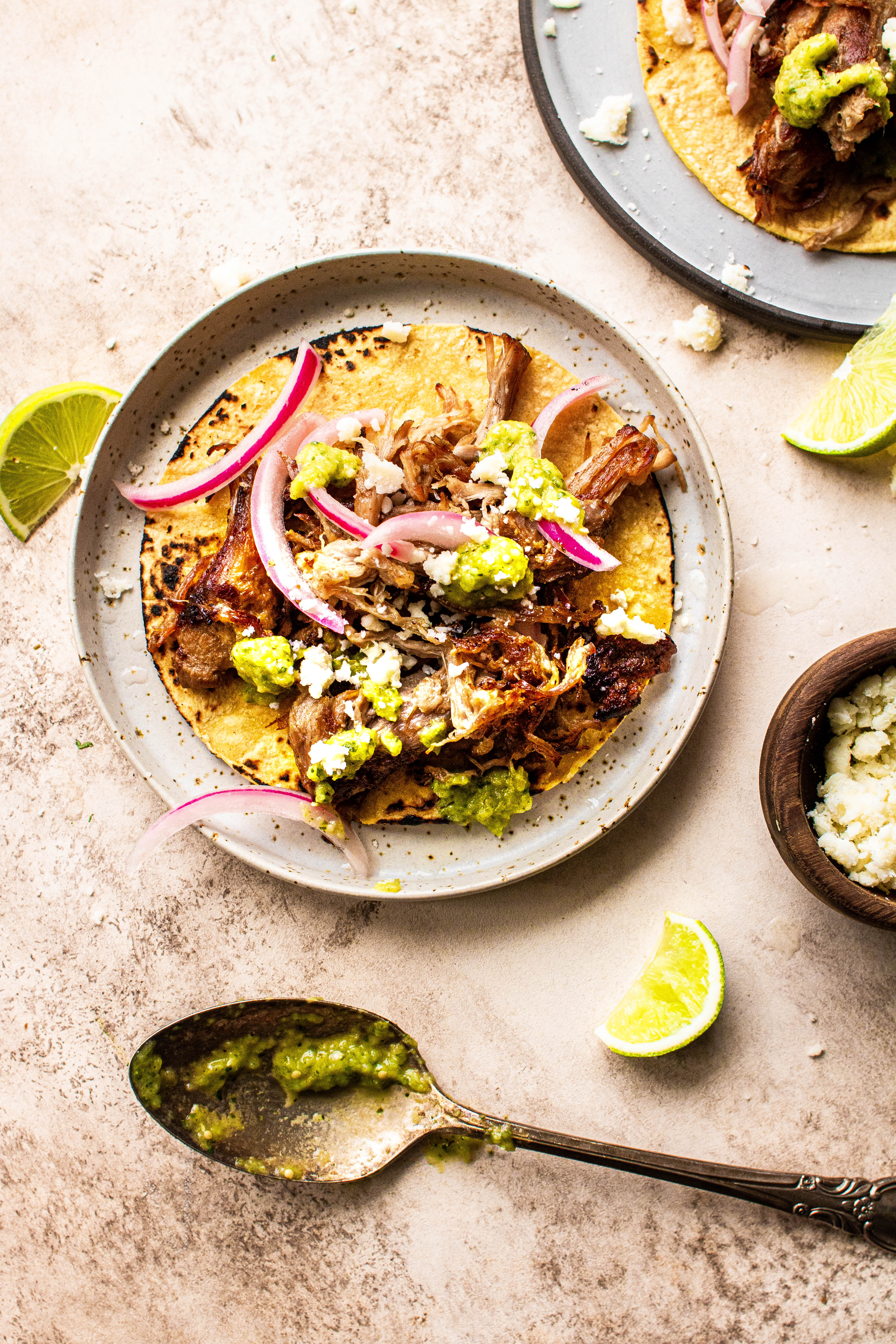 Do I have to use beer?

I personally think it adds a lot of flavor, but if you’re wary about cooking with alcohol just swap in some stock or broth. Try to use homemade broth if you have it!

What’s the best pot to use for beer-braised carnitas?

I use my 5 qt Le Creuset dutch oven (you can find it here), but any heavy-bottomed pot with a lid will work. I would opt for cast iron or enamel-coated cast iron because it holds and distributes heat really evenly. You want a pot that has a wide bottom vs being tall like a stockpot. 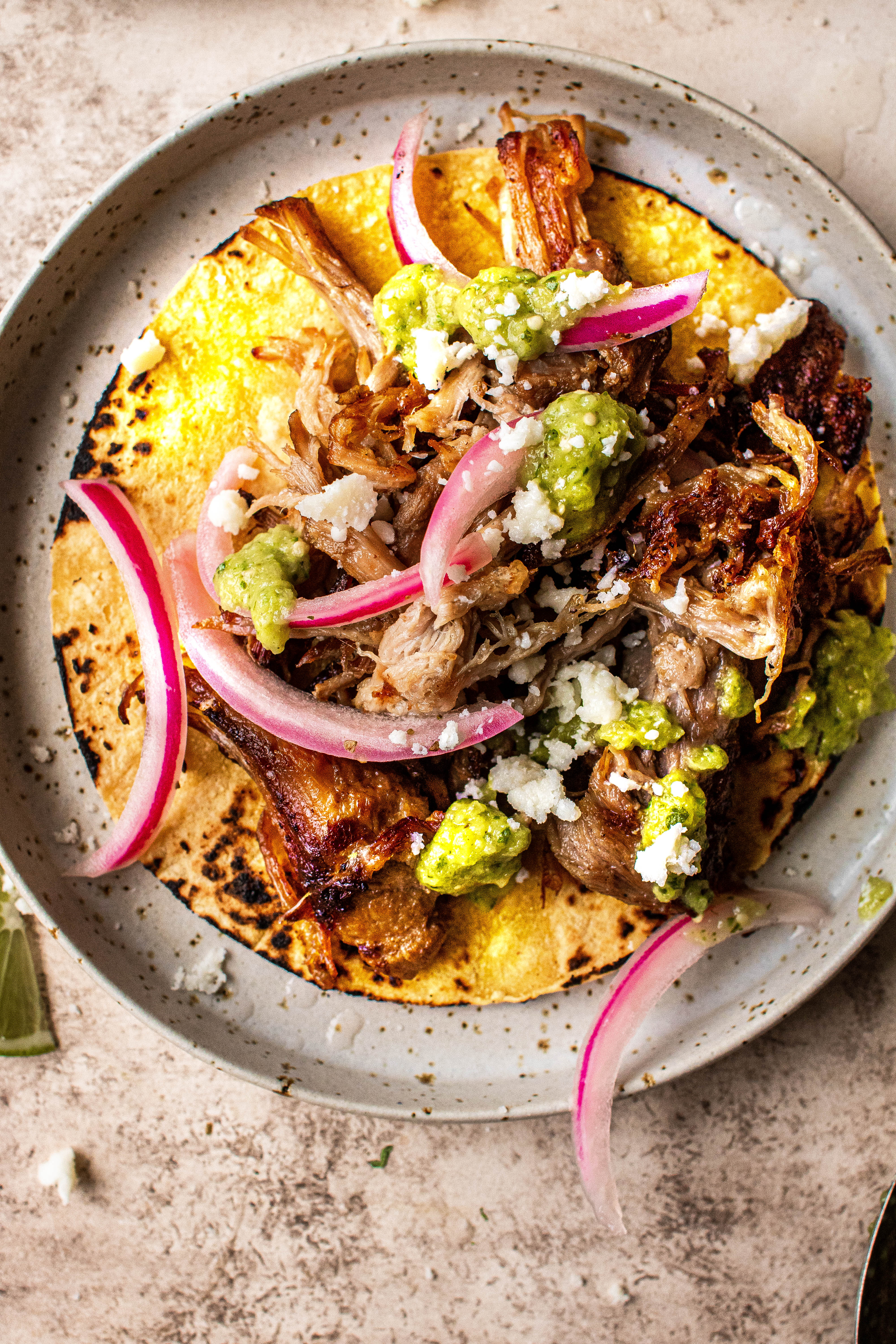 Contrary to popular belief, tomatillos are NOT simply green tomatoes. They’re actually part of the gooseberry family which is why they have a husk. They are a bit tart which makes for a very fresh salsa verde!

Any other questions about making beer-braised carnitas? Just drop them in the comments below!

salt and pepper to taste