Surprisingly, the best pork schnitzel or schweineschnitzel I’ve had was not in Germany. We were more about the pork shank or schweinshaxe in our dining endeavors. However, I had great pork schnitzel and buttermilk spaetzle at a restaurant here in San Antonio called Maverick. Perfectly crispy with a tart lemon caper sauce and the schnitzel was almost the size of the plate. It was incredible and so I set out to recreate it. This is also another dish I would serve for Valentine’s Day at home. It’s comforting, but elegant and will be so impressive to whoever has the pleasure of dining with you.

It seems like there are a lot of components to this dish, but there are some shortcuts you can take to cut down on prep. The spaetzle can be made ahead of time so long as you toss it with a little oil to keep it from sticking. Then it can be just warmed in the browned butter before serving. The pork can be butterflied ahead of time. You could even bread the pork, freeze it, and fry it directly from frozen! You’ll want to bring the oil up to 400 degrees F if that’s the case because the pork will cool down the oil as soon as it goes in. 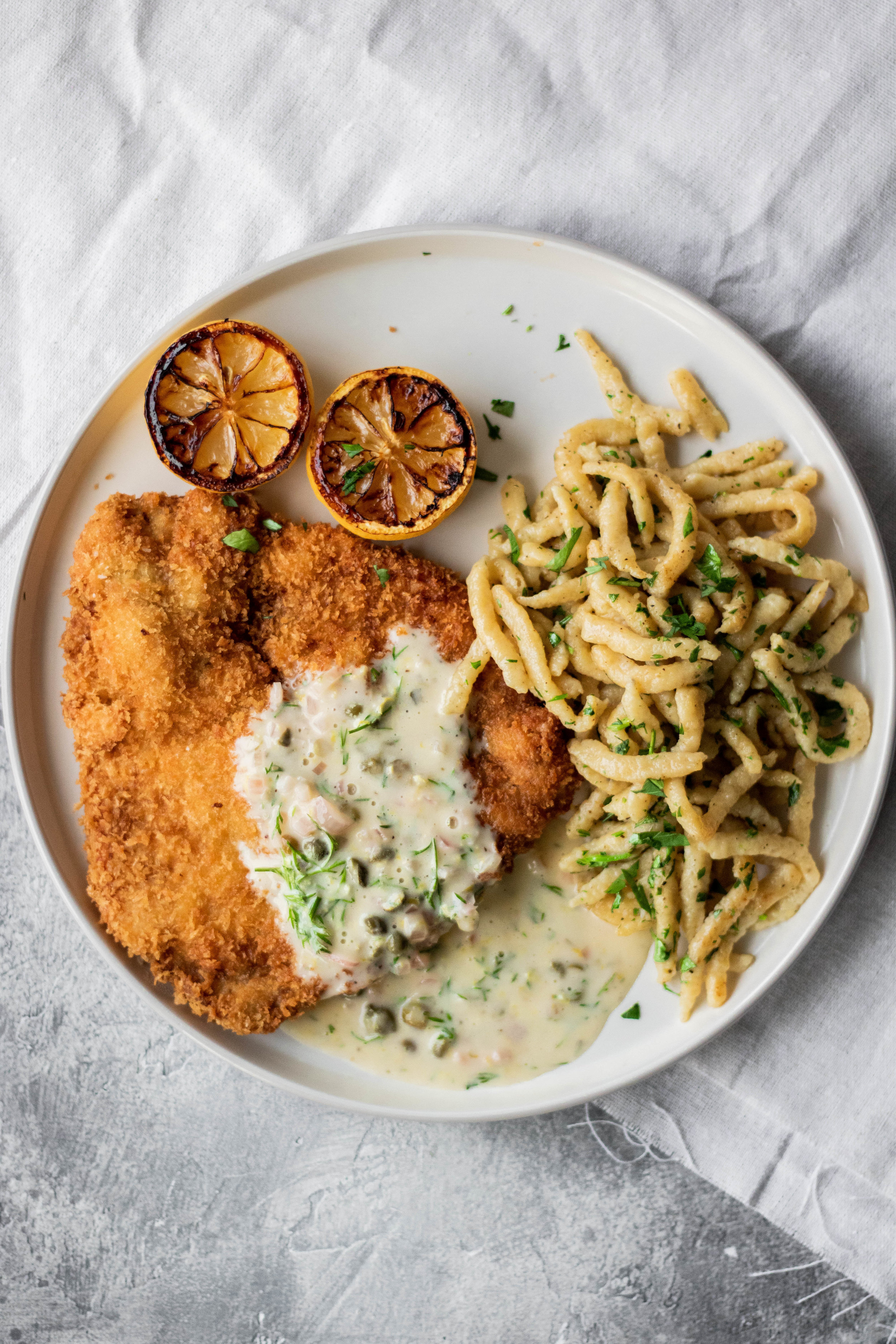 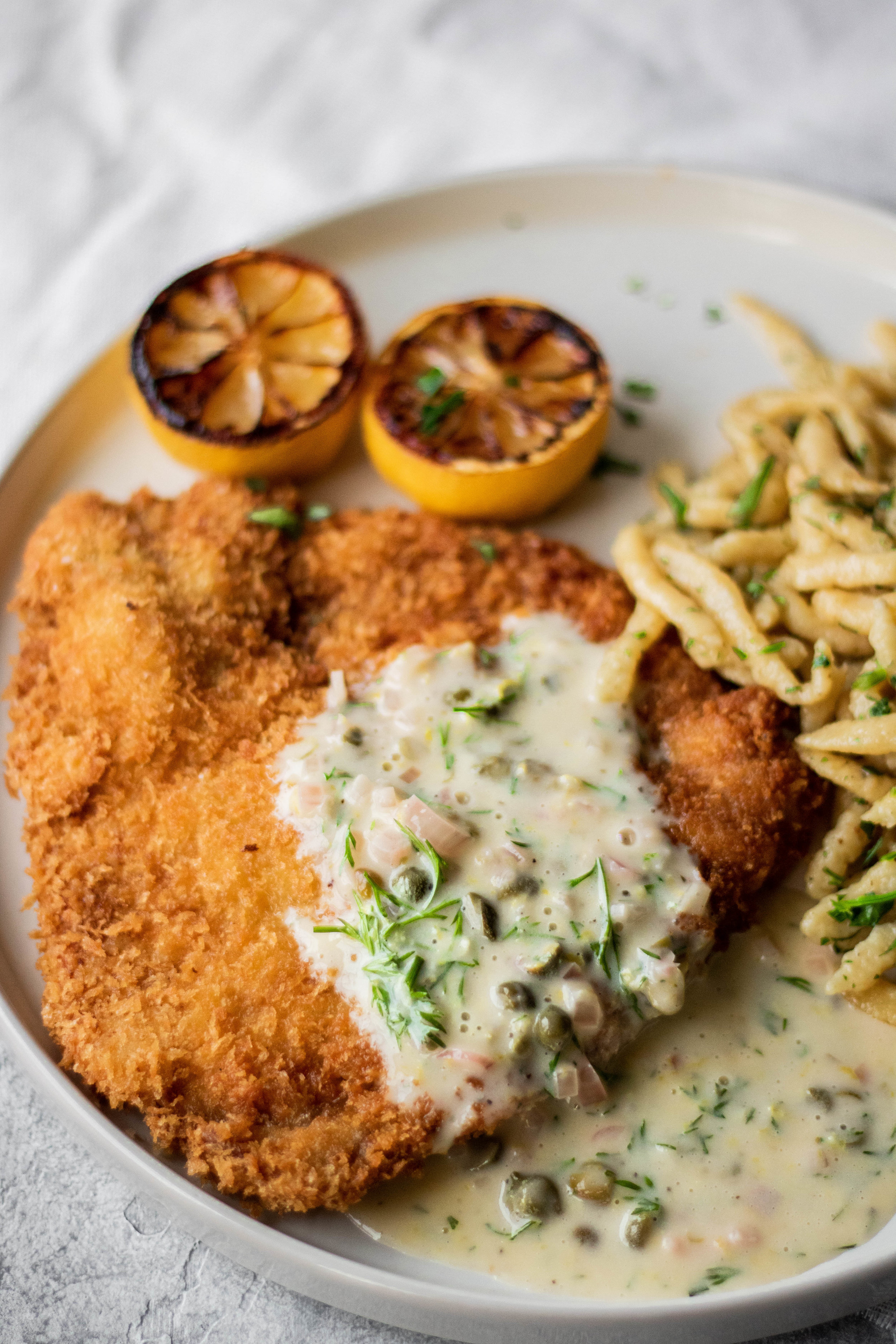 By the way, have you ever had spaetzle?! It’s magical in its simplicity. Like a cross between dumplings and egg noodles. The traditional method of making spaetzle calls for pressing the batter through a colander but forget that noise, too much work and too messy. I throw my batter into a piping bag or a ziplock and pipe it directly into boiling water. Way less clean up and turns out just as great. The buttermilk gives it a really nice tang too.

Why buttermilk, you ask? I forgot whole milk at the store. And that is basically cooking in a nutshell and if I can impart anything through this blog, I hope it’s this: I want you to feel comfortable in the kitchen adapting a recipe. Is it going to ruin the recipe if you don’t have any milk and use water instead? NO. And that’s cooking in a nutshell. It’s adaptation. Adaptation to your space, to your equipment, to your ingredients, to what you have on hand. I don’t want that art to ever be lost because that’s true cooking at its finest. 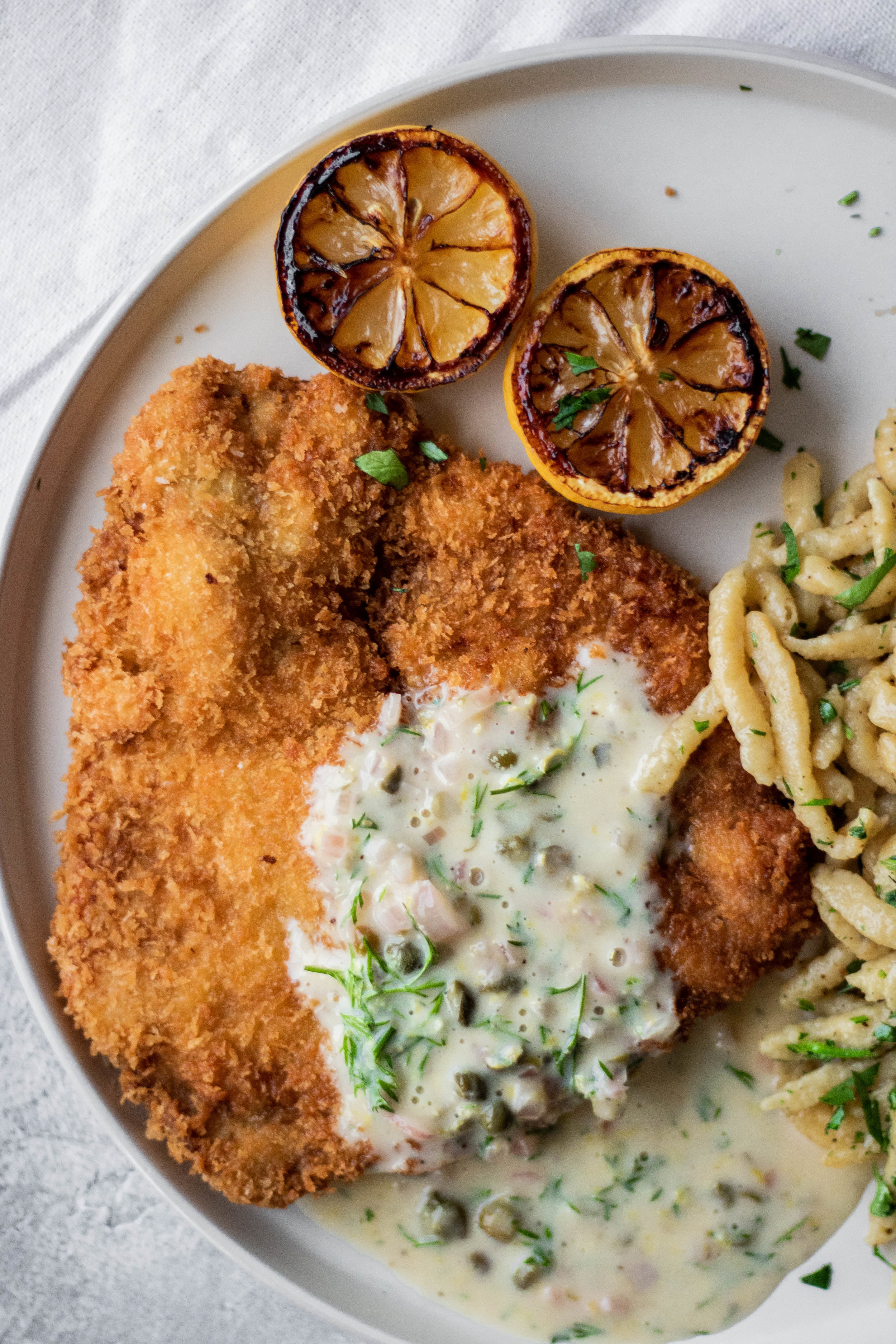 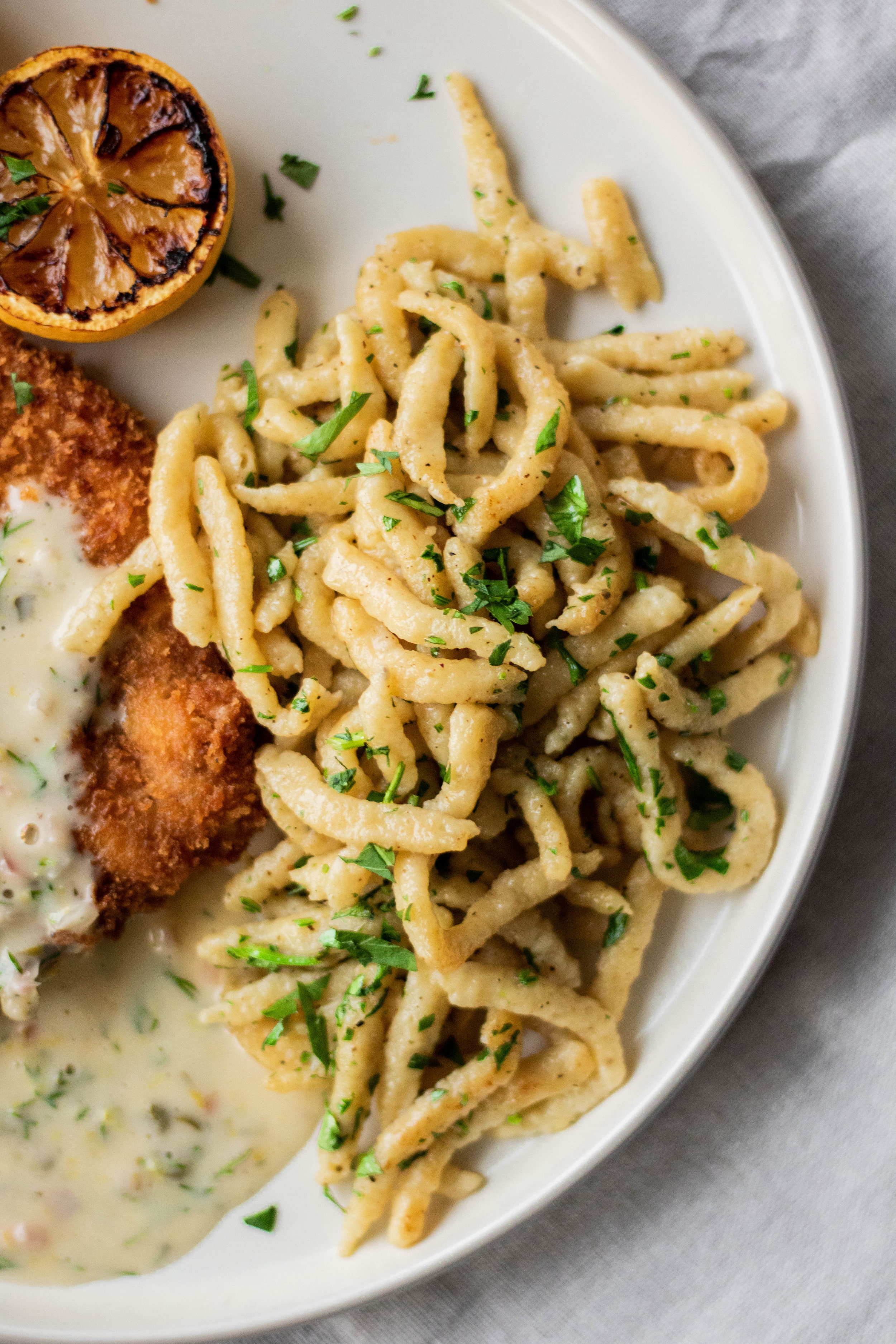 Anyway, this is the perfect meal for a Valentine’s Day at home. And you can find the step-by-step instructions for this pork schnitzel with buttermilk spaetzle on my instagram highlights to make it that much easier for you! Happy cooking! 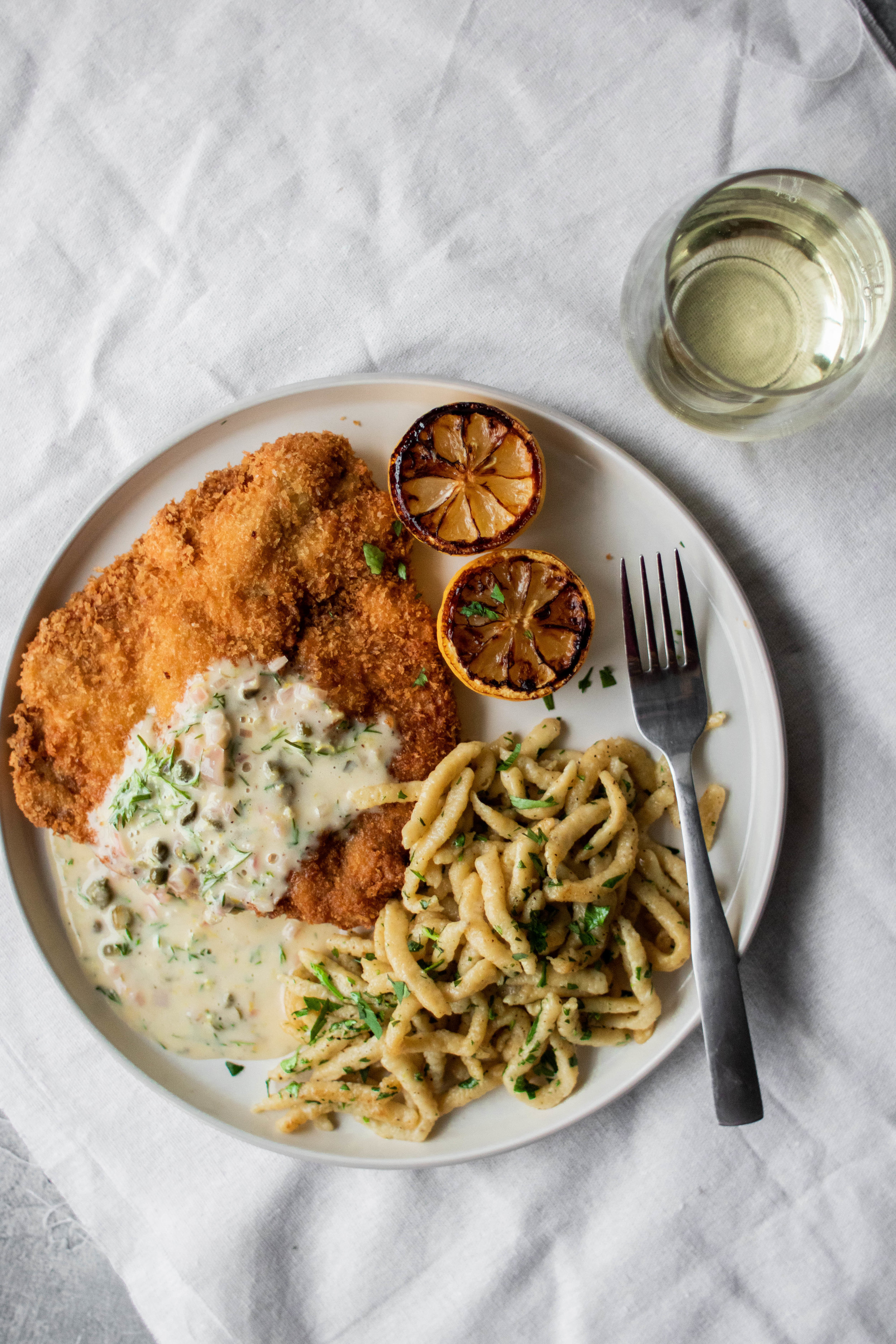 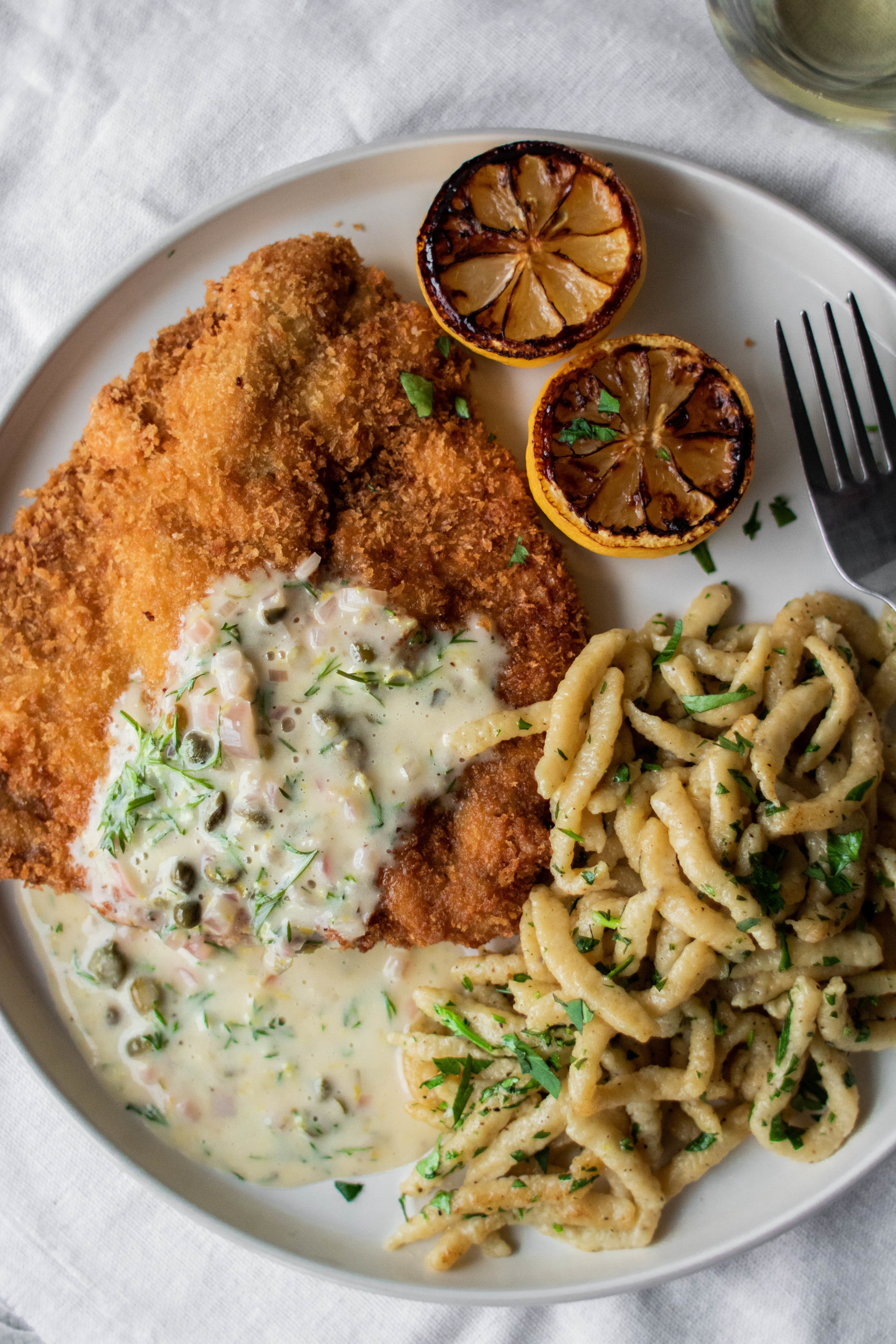 This is probably one of the tastiest and most elegant meals I’ve ever made at home!

I know this seems like a lot of work, but the pork can be butterflied in advance and the spaetzle can be cooked in advance, just make sure to toss it with oil so that they don’t stick together. Once you’re ready to prepare the spaetzle, melt the butter, like the recipe says, and rewarm the spaetzle in the pan.

You can actually butterfly and bread the pork ahead of time if you freeze it on a sheet tray. It can be cooked directly from frozen, just adjust the oil temperature to 400 to compensate for the frozen pork cooling it down and maybe add an extra minute per side in cooking.

This sauce would also be excellent on chicken or fish.

You can substitute regular milk for the buttermilk.

You can cut this recipe in half, for just two people instead of four.

readers are loving these recipes: