Potato and onion pierogies are one of my favorite comfort foods. I recently had them in New York at a little stand outside Bryant Park and I knew I had to make them. They were perfectly tender and filled with potatoes, onion, and cheese and topped with bacon and sour cream. These potato and onion pierogies are the perfect make-ahead dinner recipe. They’re also perfect as a party appetizer for any gathering! 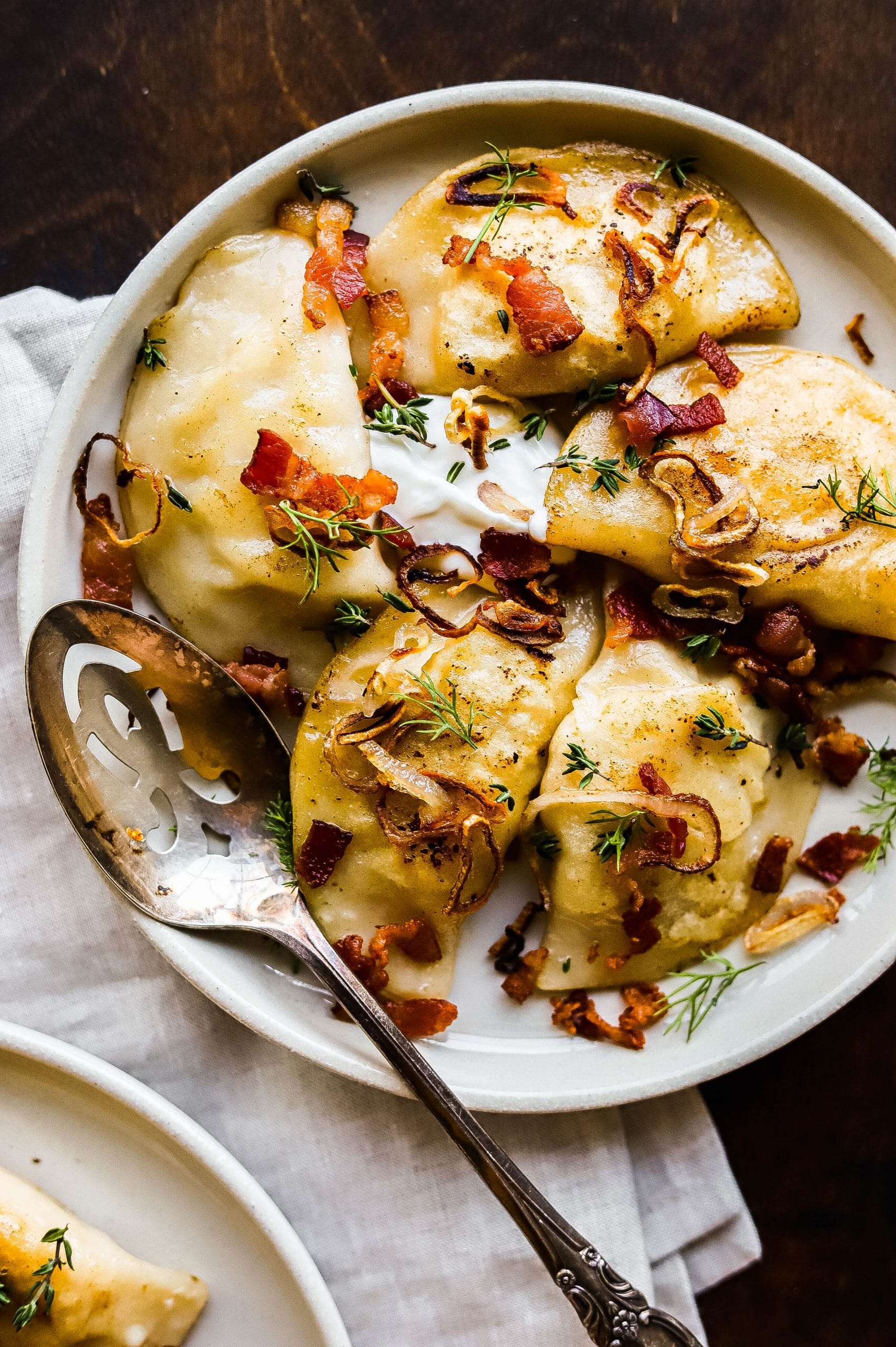 Pierogies are a polish staple, but the origin is a bit of a mystery as there are tons of stories floating around. Pierogies are filled dumplings made by wrapping dough around a savory or sweet filling. Typical fillings include potato, cheese, quark, sauerkraut, ground meat, or mushrooms. Often, you’ll see them topped with sour cream and fried onions. Now, I don’t claim for this recipe to be authentic. I am not Polish, but I love trying to recreate dishes that I love and these do a pretty great job!

How to make Potato and Onion Pierogies

Making pierogies takes a little practice and work, but the end result is so worth it! I like to make a huge batch and freeze them so I always have some potato and onion pierogies on hand.

Ingredients for Potato and Onion Pierogies 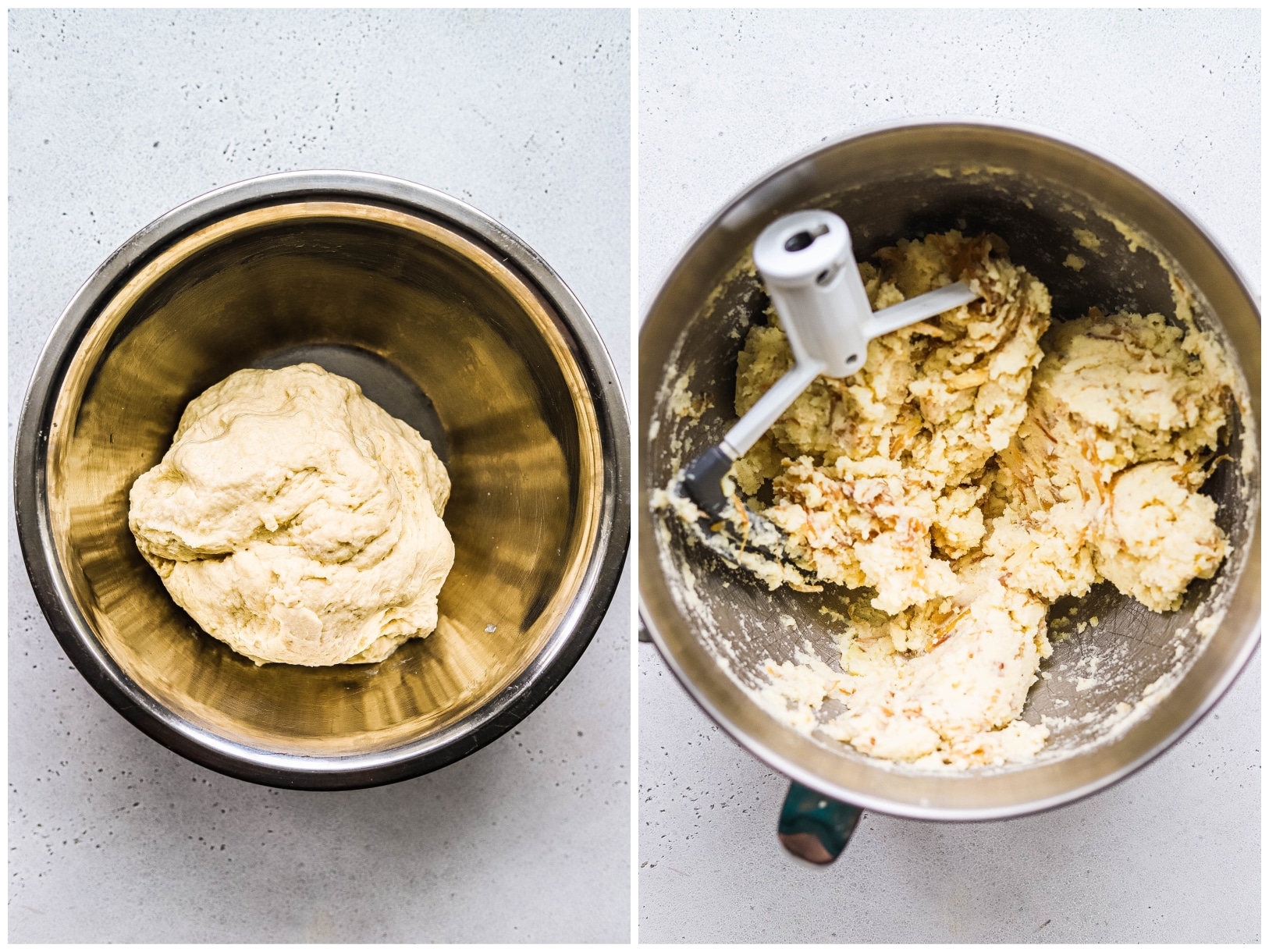 How to make pierogi dough

I love how easy it is to make this dough recipe! It’s even easier to make the dough in a stand mixer, but you can also mix it by hand.

If you’re making this dough in a stand mixer, combine the flour, oil, salt, sour cream, and egg in the bowl of your mixer fitted with the paddle attachment. With the mixer running on low, slowly stream in the hot water and mix until everything is combined. Mix an additional 4-5 minutes, until the dough is smooth, and then wrap the dough in plastic wrap and rest for 30 minutes.

If you’re doing it by hand, follow the same steps in a mixing bowl using a dough whisk and then knead by hand until the dough is smooth.

Making potato and onion pierogies is a bit of work, so when I’m in the mood to make them I like to make a ton. Shape and fill your pierogies and place them on a lightly floured baking sheet and freeze them in a single layer for 45 minutes. At that point, you can transfer them to another container and they’ll last in the freezer for up to 1 year. You can boil them directly from frozen! 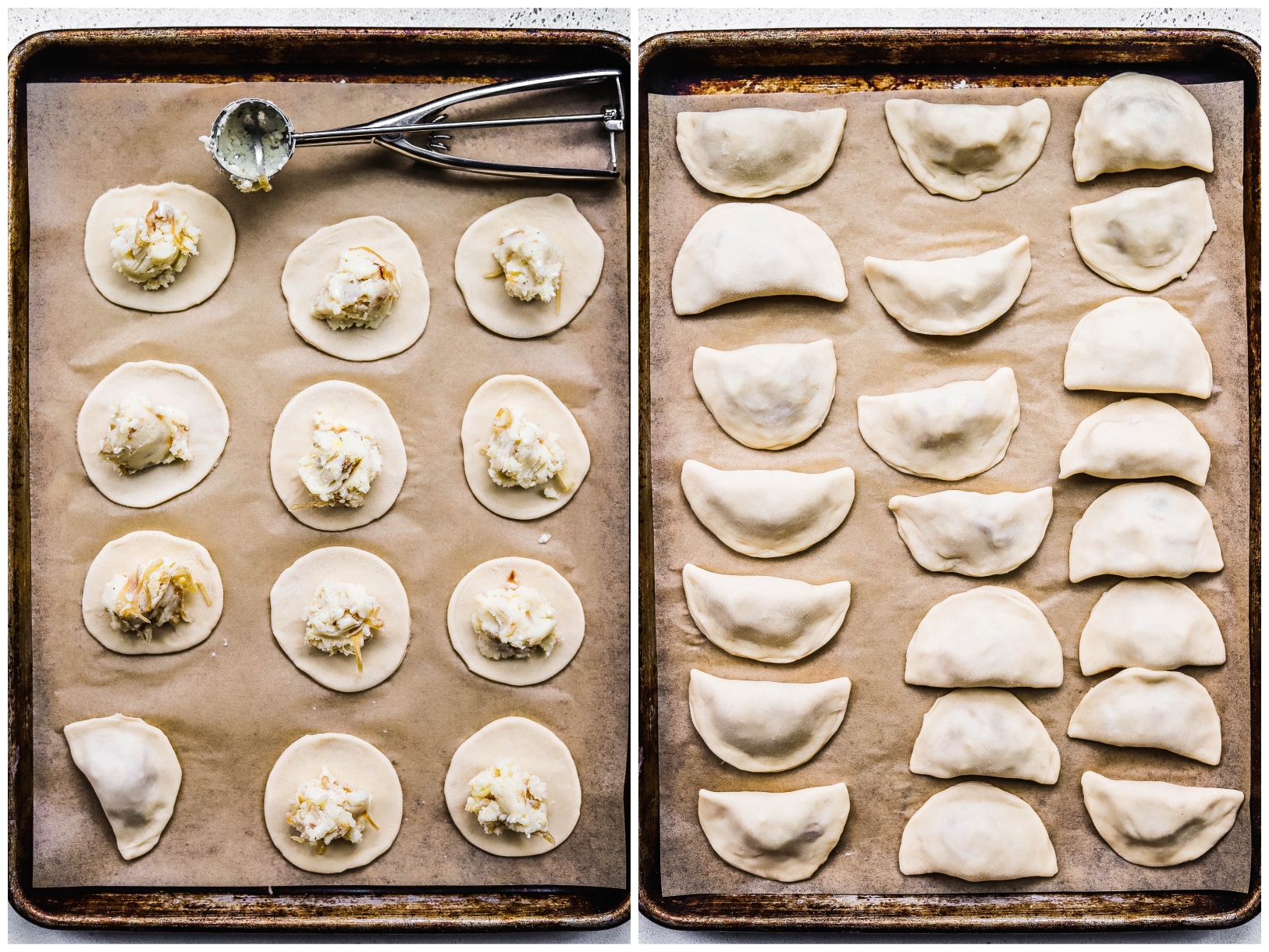 I always find myself with leftover mashed potatoes, especially after the holidays. If you find yourself in the same boat, potato and onion pierogi is the perfect recipe to transform those leftovers.

To make these pierogies with leftover mashed potatoes, combine 3 cups of cold mashed potatoes with the caramelized onions, 1 cup of shredded cheese, and 1/4 cup sour cream. Season to taste with salt and pepper. After this, follow the rest of the recipe as instructed!

Other Appetizer Recipes to Try

See above post for making these pierogies with leftover mashed potatoes. You can easily double this recipe.