If you haven’t ever had panzanella salad, now is the time to try it. Tomatoes are at their peak flavor and beauty and just waiting for you in the produce section!

I was grocery shopping and came across these beautiful heirloom tomatoes at my local Central Market, so that’s what I used–but any big, ripe, flavorful tomato will do. Add in your favorite veggies and herbs for a fresh salad that truly embodies summer.

What is a Classic Panzanella Salad?

You might be wondering: what even is a classic Panzanella salad? Panzanella is a Tuscan salad made of ripe tomatoes, stale bread, onions, and often times cucumbers, basil, and cheese with a simple vinaigrette. In this case, I found that stale bread did not make a great addition and so I opted for toasting the bread instead. If you happen to have stale bread, toasting it will absolutely bring it back to life!

What kind of Bread should I use in Panzanella Salad?

If you’re wondering what kind of bread to use in a classic Panzanella salad, I’ve got you! You’ll want to use any quality crusty bread. A loaf of ciabatta or sourdough works great. Some recipes call for cubing the bread, but I actually like to tear mine into pieces. I find that the irregular shapes toast up nicely and really soak up that yummy vinaigrette.

Can Panzanella be gluten-free?

If you can find good-quality gluten-free bread, this salad can absolutely be gluten-free. All of the other ingredients in the salad are naturally gluten-free.

If you remove the cheese or use a plant-based version, this classic Panzanella salad recipe is vegan. If you believe that honey falls outside veganism, simply swap in some agave nectar.

Making the Vinaigrette for Panzanella

The dressing is a very simple vinaigrette made from a handful of ingredients. First, you’ll want to use good-quality extra virgin olive oil. Olive oil adds tons of flavor to the dressing, so I would find one that you really love. I used red wine vinegar in this recipe because I love the combo of olive oil and red wine vinegar.

If you prefer sherry vinegar, that would be a great substitution also. I added a tiny bit of honey for balance and dijon to emulsify the dressing. The last ingredient is dried oregano–this adds so much flavor and freshness. Season your dressing well with salt and pepper, whisk until smooth, and then you’re all set! 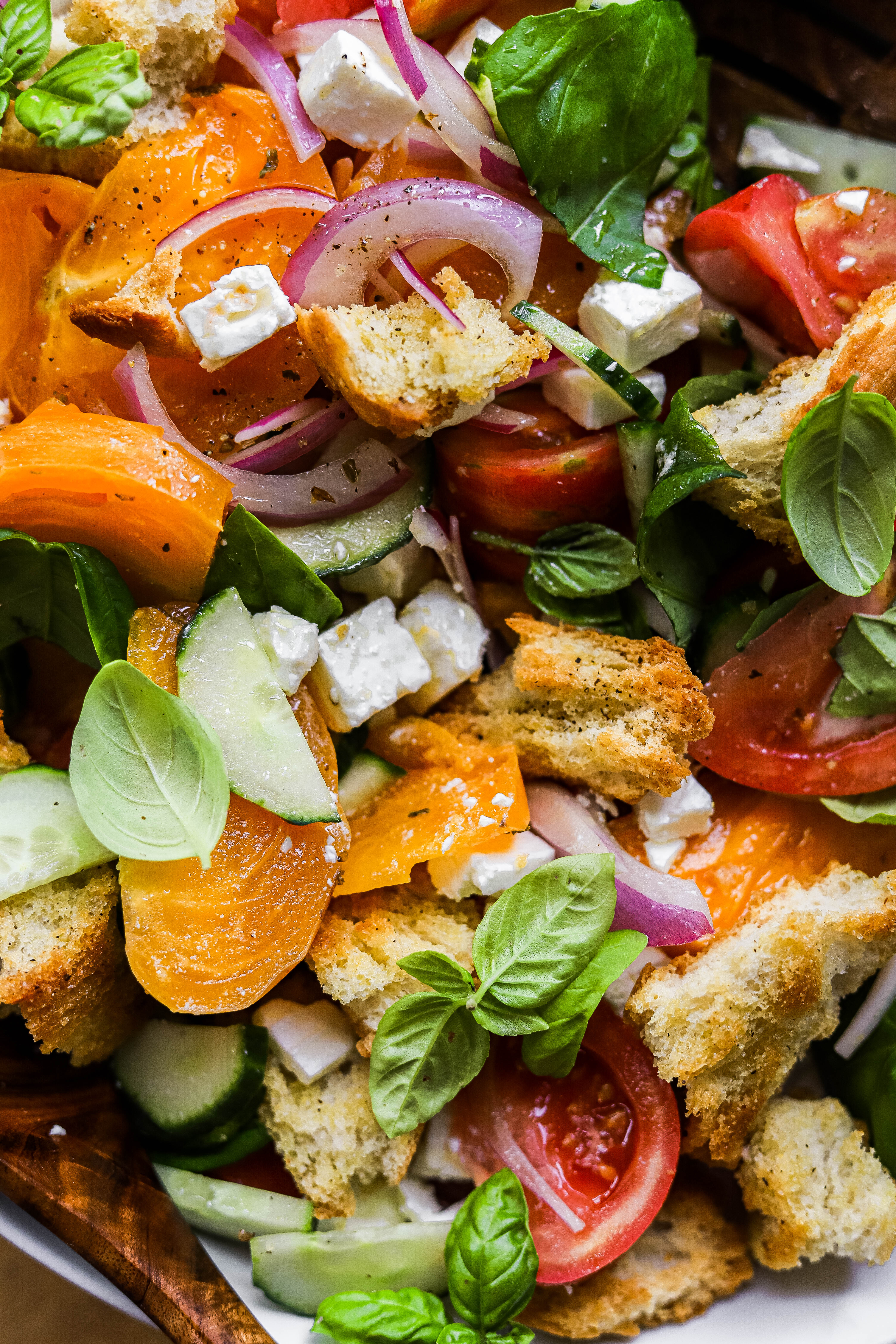 Can you make Panzanella ahead of time?

I don’t recommend making this salad ahead of time because it’s really best made fresh and served immediately. That being said, you can prep the ingredients ahead of time and assemble them right before serving! This salad doesn’t make great leftovers, in my opinion, so only make as much as you plan to eat.