Cha siu bao is one of the most common street foods in China as well as a popular dim sum dish the world over. Tender, fatty pork smothered in a flavorful soy-based sauce, wrapped in a soft bread-like dough. What’s not to love about that combination? Steamed pork buns are basically the pulled pork sandwiches of Chinese culture–classic and made differently everywhere. I won’t pretend for one second that these are perfectly authentic–I never intended them to be. Is anything ever completely authentic? Recipes have changed hands so many times and been passed through so many generations, been adapted so many times that nothing will ever have a true ring of “authenticity”. But let me tell you, these rival any of the steamed buns I’ve had in any dim sum joint. Plus, I had a blast making them. It’s always fun to find new ways to challenge myself and shaping these steamed buns like little pigs definitely fit the bill (plus they’re cute as hell). Please understand that you do not need to be this extra. Pork wrapped in the dough and steamed the good old fashioned way is equally as good (though maybe not as cute on the plate)! 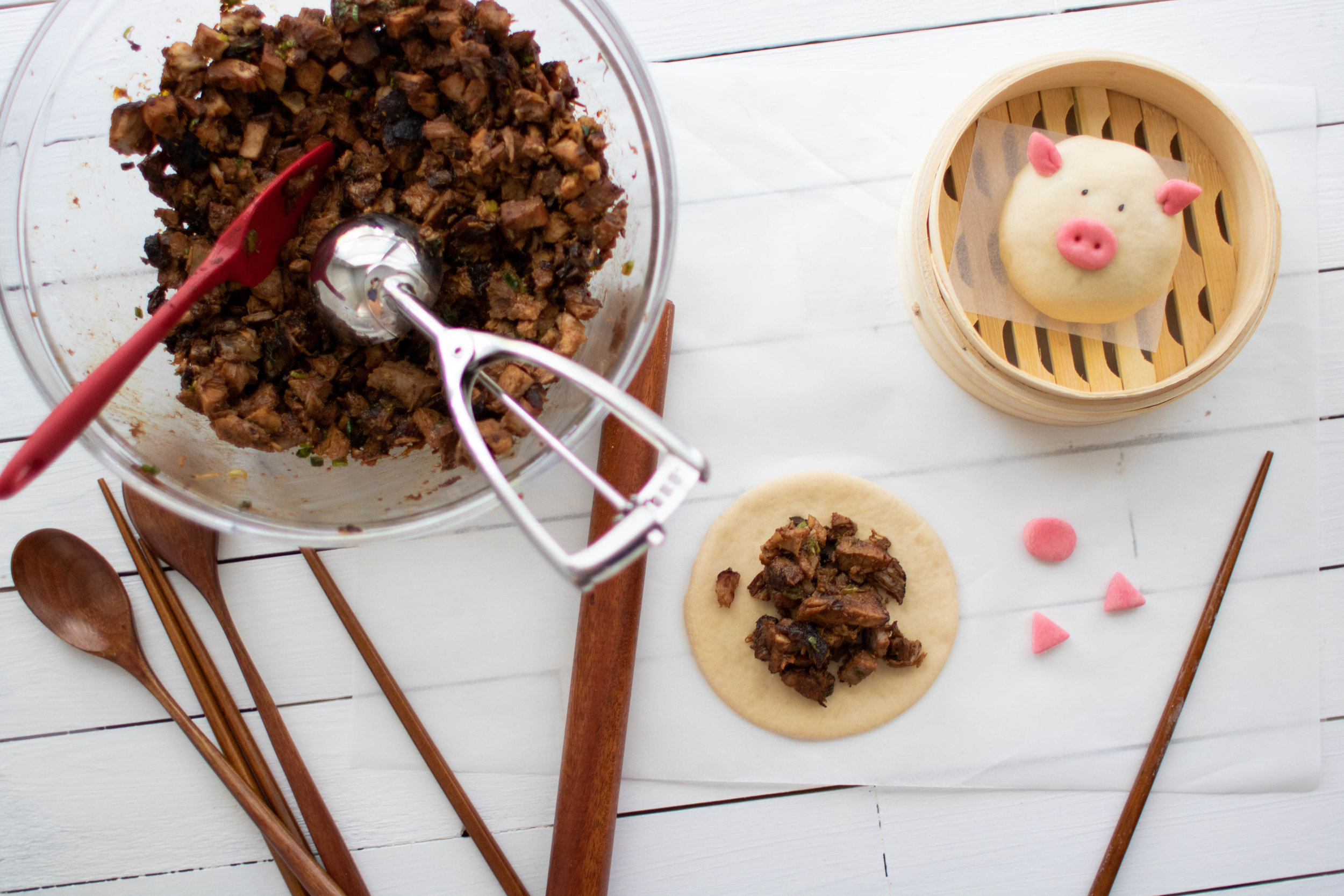 Though it may seem daunting to tackle steamed buns, it’s really quite simple. The recipe starts with pork butt, which if you didn’t know is actually the shoulder of the pig. It’s fatty and flavorful and perfect for this recipe. I selected a bone-in piece which adds a bit more flavor, but boneless is fine too. You’re going to want to look for roughly a 2 pound piece–I would ask your butcher to cut down a larger piece. This can also be done with pork belly, though that will be considerably more fatty. Marinating the pork is a huge part of the process, so marinate overnight if you have time or for at least 4 hours. Keep in mind, you can cook the pork the day before you plan to have steamed buns to help break up the work.

The bun dough is definitely one of the easier doughs I’ve made in the past. Yeast is added to warm water in the bowl of a stand mixer fitted with the dough hook and then basically all the rest of the ingredients are dumped in and your mixer does all the work. I like to weigh all the ingredients besides the water and yeast into one bowl and then I just toss it all in and mix for about 10 minutes, adding the softened butter in just as the dough starts to come together. When the dough is smooth, it’s time to throw it into a greased bowl or ziplock bag and let it rest for about an hour and a half at room temp. If you want to make little piggies too, grab a small portion of the dough, add a couple of drops of pink gel food coloring (I used americolor’s soft pink), and knead until the pink has been mixed throughout. This dough will need to rise in a separate bowl or a smaller ziplock bag so that the colors don’t mix. I like to chill my dough in the fridge for a bit before working with it which also gives the pork time to finish cooking/cooling. 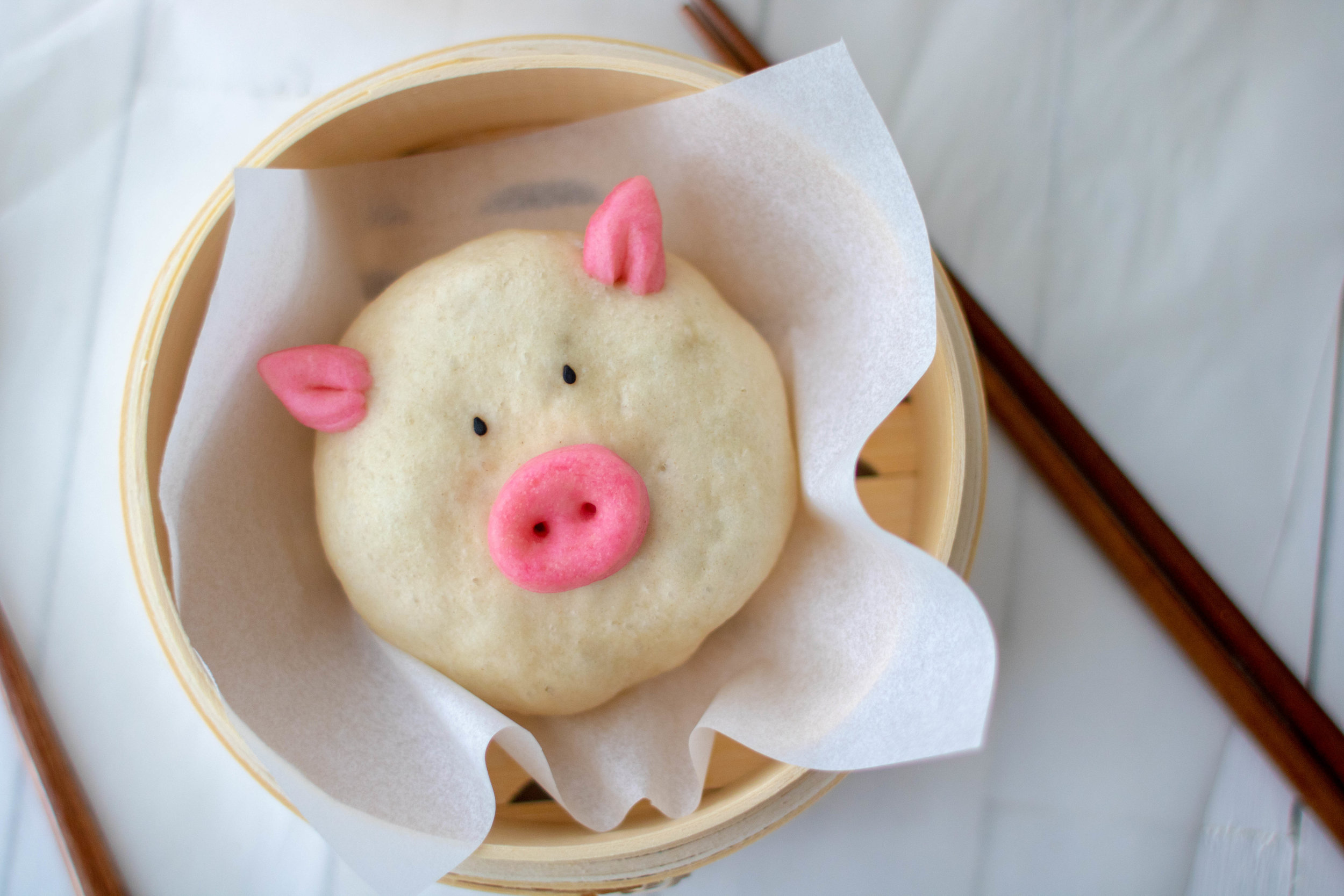 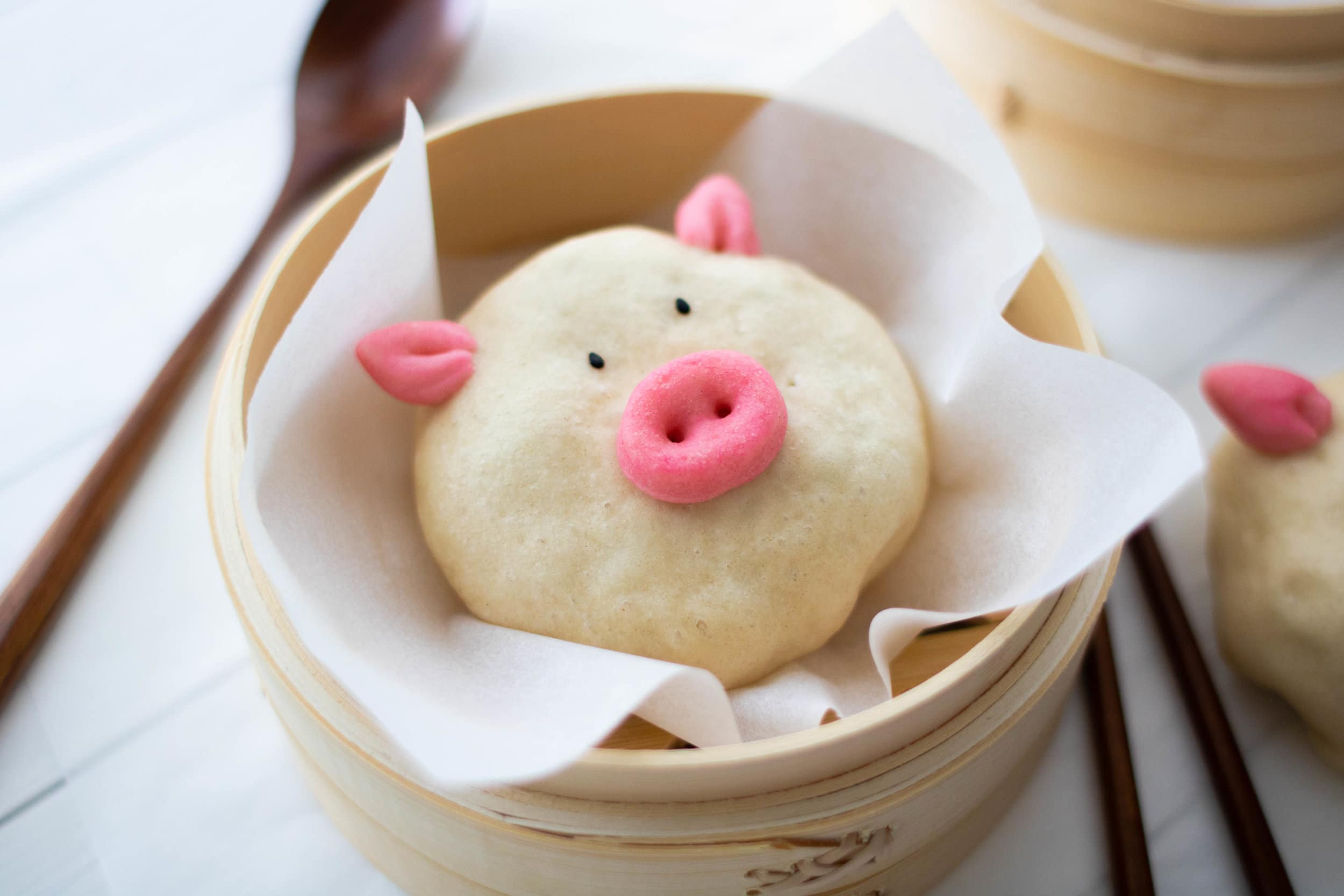 Once you remove the pork from the marinade, save half which will be simmered and tossed with the chopped pork to add some more flavor. The pork then gets slow roasted so that the fat melts but the meat stays nice and tender. This starts by roasting the pork at 400 degrees F for 1 hour and then dropping the temp to 300 degrees F for another 2.5 hours. Once the pork has cooled a bit, it gets chopped into about 1/2 inch pieces and tossed with the simmered marinade and some sliced green onions. Once the filling has cooled, it’s time to wrap the buns! I’ve created a little video below as a tutorial for creating the little pig buns but also just for shaping the buns. I used tiny cookie cutters to cut out ovals and triangles for the snouts and ears (I used a chopstick to press the snout into the bun and to create little nostrils). I attached the noses and ears with just a little water and used black sesame seeds for the eyes. I hope you guys have as much fun making and eating these little guys as I did!

Mix all marinade ingredients together. Place pork in a large ziplock bag. Add marinade to the bag and place in the refrigerator overnight or marinade for at least 4 hours.

Preheat oven to 400 degrees F. Remove pork from marinade (reserve half) and place on a wire rack set over a rimmed baking sheet. Roast pork for 1 hour and then drop the temperature to 300 degrees F and roast for another 2.5 hours, until tender. Add reserved marinade to a small pot or sauce pan and simmer for 10 minutes, until thickened. Set aside. Remove pork from the oven, cool, and chop into roughly 1/2 inch pieces. Toss with cooked marinade and green onions and set aside until cool. 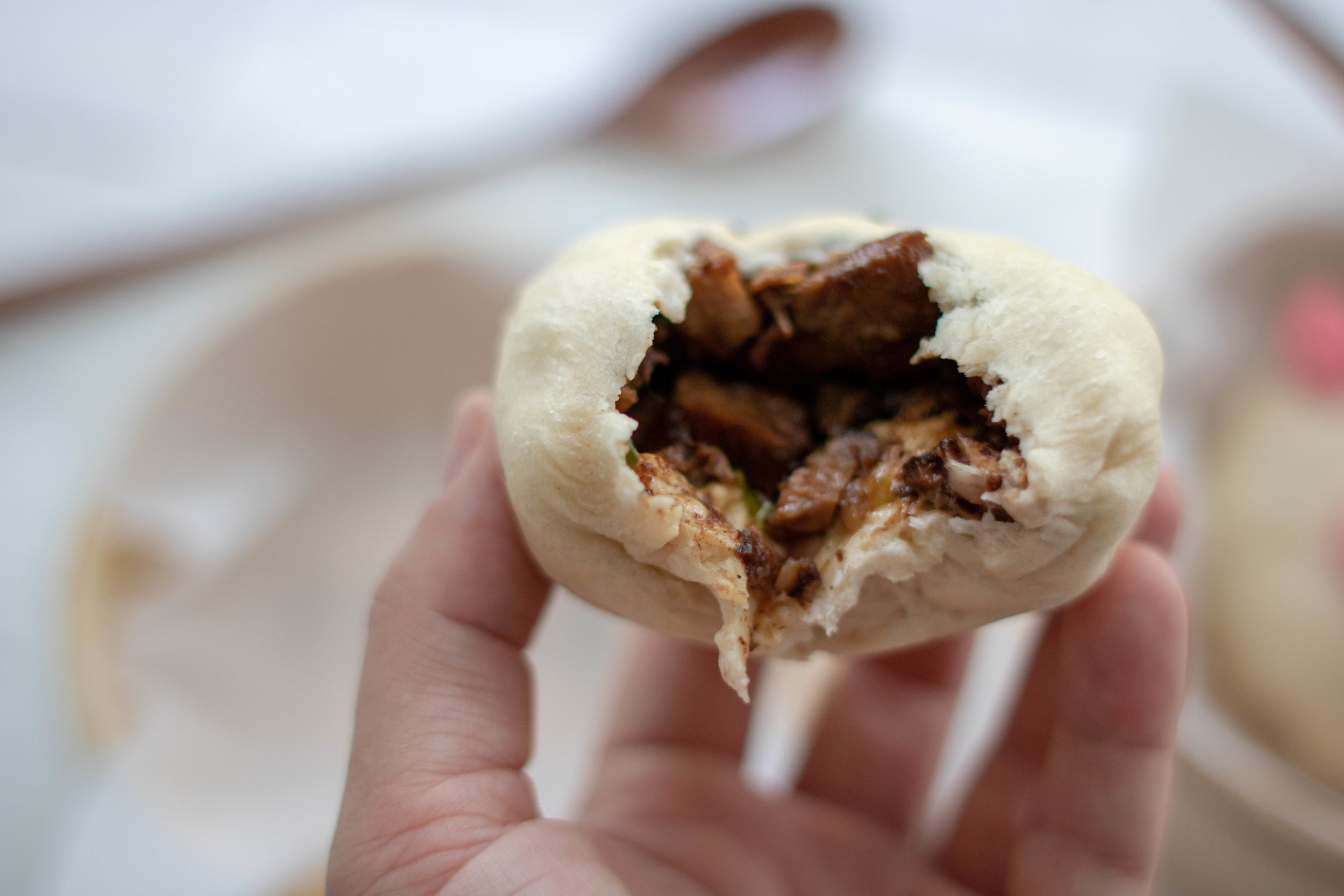 Add water and yeast to the bowl of a stand mixer fitted with the dough hook attachment. Let sit for 5-10 minutes until yeast is foamy. In a separate bowl, weigh flour, salt, baking soda, baking powder and milk powder. Dump all ingredients into mixer bowl with yeast and water and turn mixer on low. Mix until dough just starts to clump together, then add softened butter. Mix dough for another 10 minutes, or until dough is smooth.

If you are planning to make little pigs, take a small portion of dough (palm sized) and add a couple of drops of pink food coloring and knead until dough is pink. Place both doughs into separate greased bowls and cover with plastic wrap. Let dough rise at room temperature for about an hour and a half and then place in the fridge for 30 minutes or until cool to the touch. Cut out about 25 4-inch squares of parchment paper.

Roll dough out into a large circle about 1/4 inch thick. Using a 5″ circle cutter, cut out as many circles as possible. Alternately, roll dough into a log and cut 20 equal pieces. Roll each piece of dough into a 5 inch circle. Fill each circle with about 2 tablespoons of filling and pinch the top closed. Place each finished bun on a piece of parchment paper. If you want to turn them into piggies, watch the tutorial video above! The pink dough is rolled out to the same thickness and I used little triangle and oval cutters to make shapes for the ears and nose. I attached the nose and ears with a little water and pressed black sesame seeds into the bun for eyes.

Set a bamboo steamer basket with lib over simmering water (do not let the basket touch the water). In batches of 3-4 depending on the size of your basket, place the buns and their parchment squares in the basket and cover with the lid. Steam for 10-12 minutes or until bun is puffed and slightly firm to the touch. Serve warm!