Sausage and fennel stuffing is loaded with spicy sausage, caramelized onion, fennel, fresh herbs, and baked to crispy golden perfection. I’ll confess, I’ve never really been a fan of stuffing but this recipe totally changed my mind. It packs so much flavor and texture that it blows boring stuffing recipes out of the water. You can make several components of this recipe ahead of time, making it a game-changing side.

This recipe for sausage and fennel stuffing is baked alongside the turkey, not inside. Technically, that makes it a “dressing”. I don’t really care what we call it, but you should not be baking anything in your turkey’s cavity except for aromatics.

Stuffing your bird with bread slows down the cooking process and yields an unevenly cooked turkey. If you have uncooked turkey juices dripping onto your stuffing and it doesn’t reach 165 F internally, it’s not safe to eat. For the stuffing to reach 165 F, the rest of the bird will dry out.

How to Make Sausage and Fennel Stuffing

I love how easy it is to make sausage and fennel stuffing! You can make several of the components ahead of time for easy cooking. 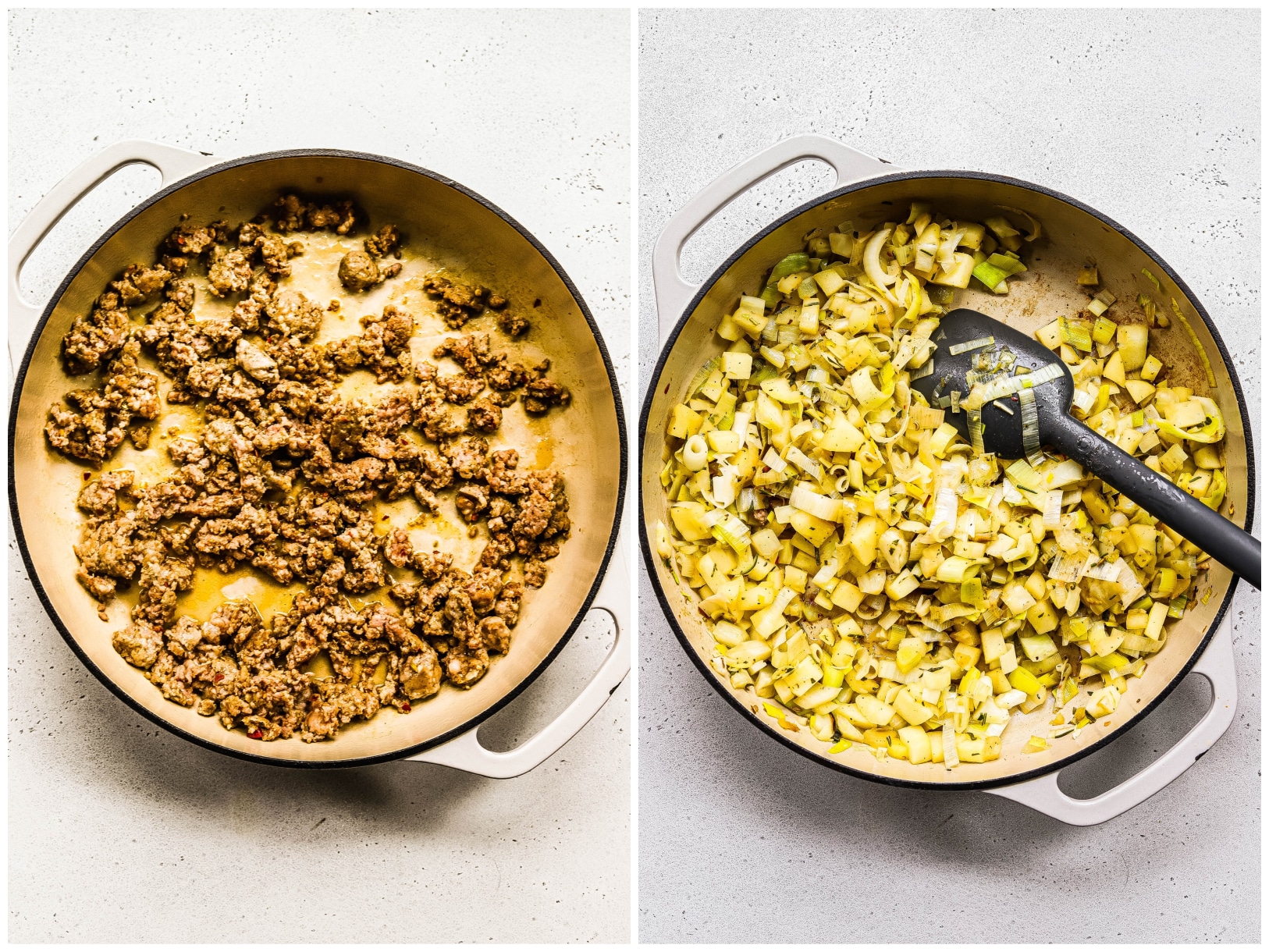 The best bread for stuffing

As mentioned above, the best bread for stuffing has a tight crumb (sorry airy sourdough!). You want bread that will easily absorb all the liquid and hold onto it so it doesn’t dry out. I really love mixing breads–my favorite is a mix of sandwich sourdough bread and pumpernickel.

I think the color and flavor contrast is beautiful. Use your favorite, but keep flavor and texture in mind. No matter what bread you use, it’s gotta be dry! Dry bread absorbs the liquid in this recipe without becoming soggy mush.

Drying out bread for stuffing

Bread needs to be dry for stuffing, it’s the only way it’ll absorb the liquid without becoming mush. If you have time, you can spread your torn bread out on a baking sheet and let it dry out for a day or two on your counter.

If you need to speed things up, spread your torn bread on a baking sheet and bake at 250 F until the bread is dried out, but not brown. Cool before using. 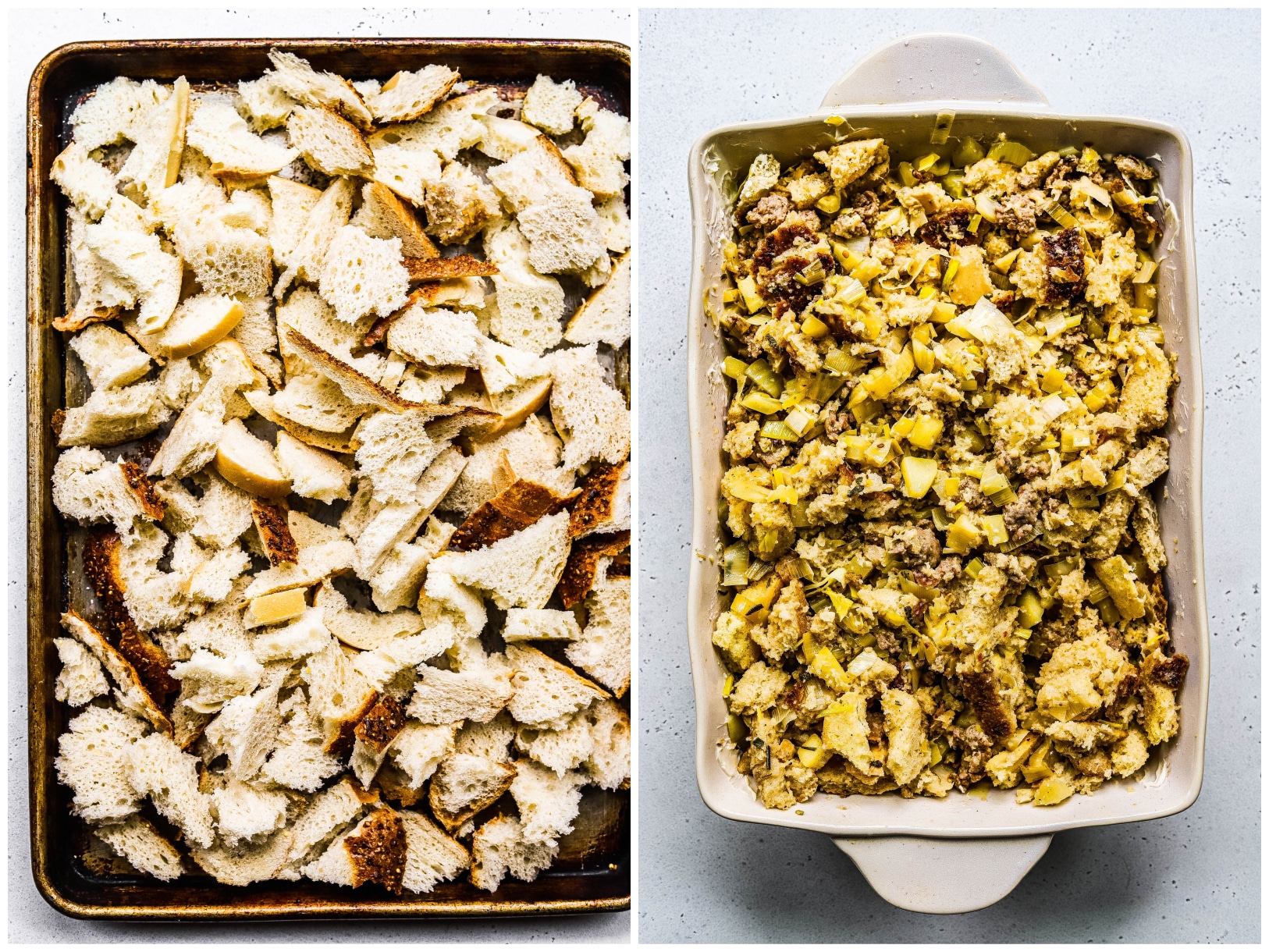 How to make sausage and fennel stuffing ahead of time

This recipe has two separate components: the dried bread, and all the meat and veggies. The day of cooking can be really hectic so this recipe is a cinch to make ahead. There are two options for making sausage fennel stuffing ahead of time:

You may notice that this recipe calls for torn bread and not cubed. I find that the odd shapes of torn bread fit together better, absorb the liquid better and more evenly, and the crooked nooks and crannies brown beautifully. Give torn bread a try, you won’t go back!

If you find that your stuffing is very soggy after baking, it’s possible that your bread wasn’t dry enough. No sweat! Bust out a baking sheet and scoop chunks of the stuffing onto the sheet. Bake at 450 F until it’s browned and sufficiently dried out. Stuffing saved! 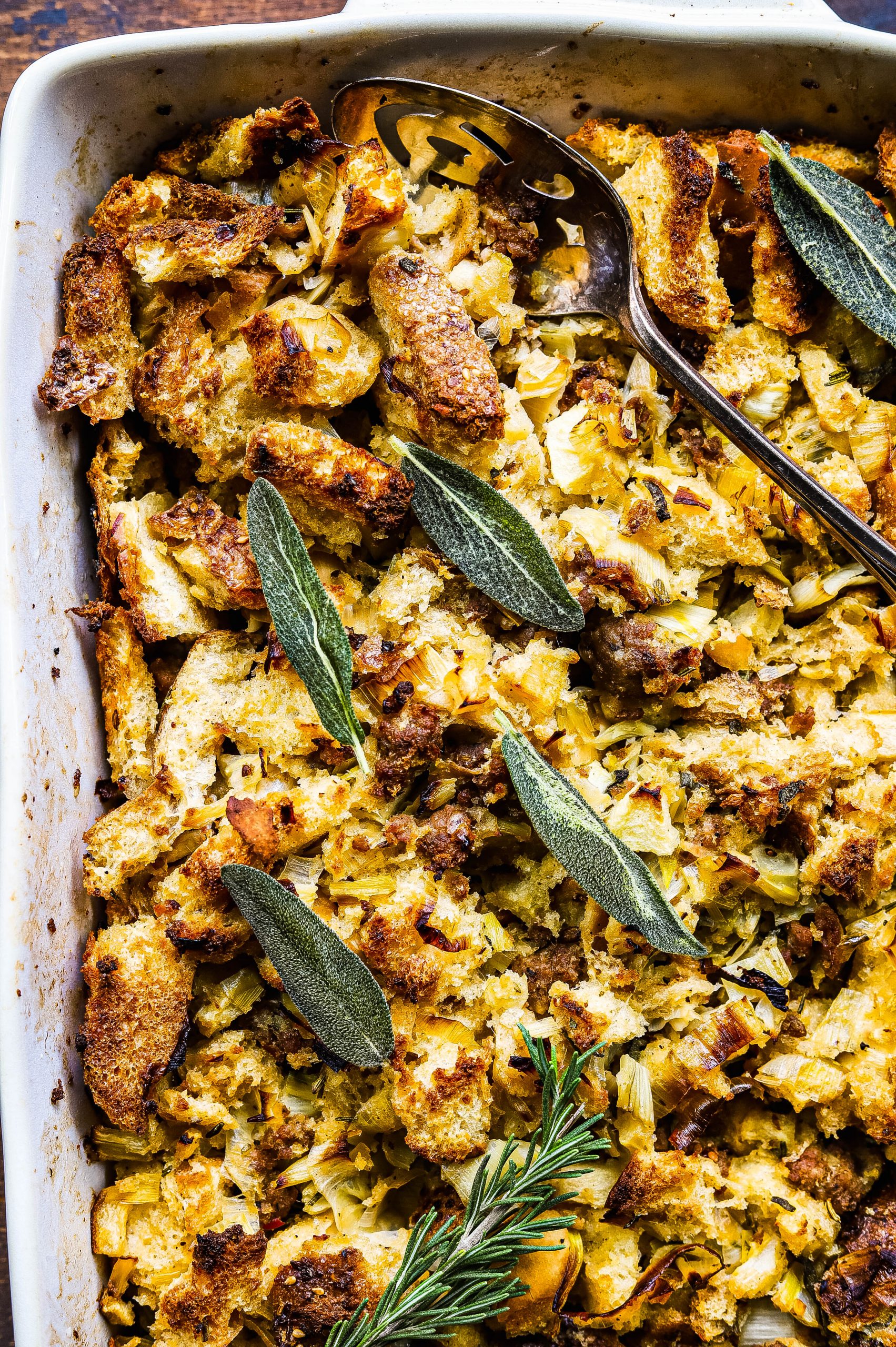