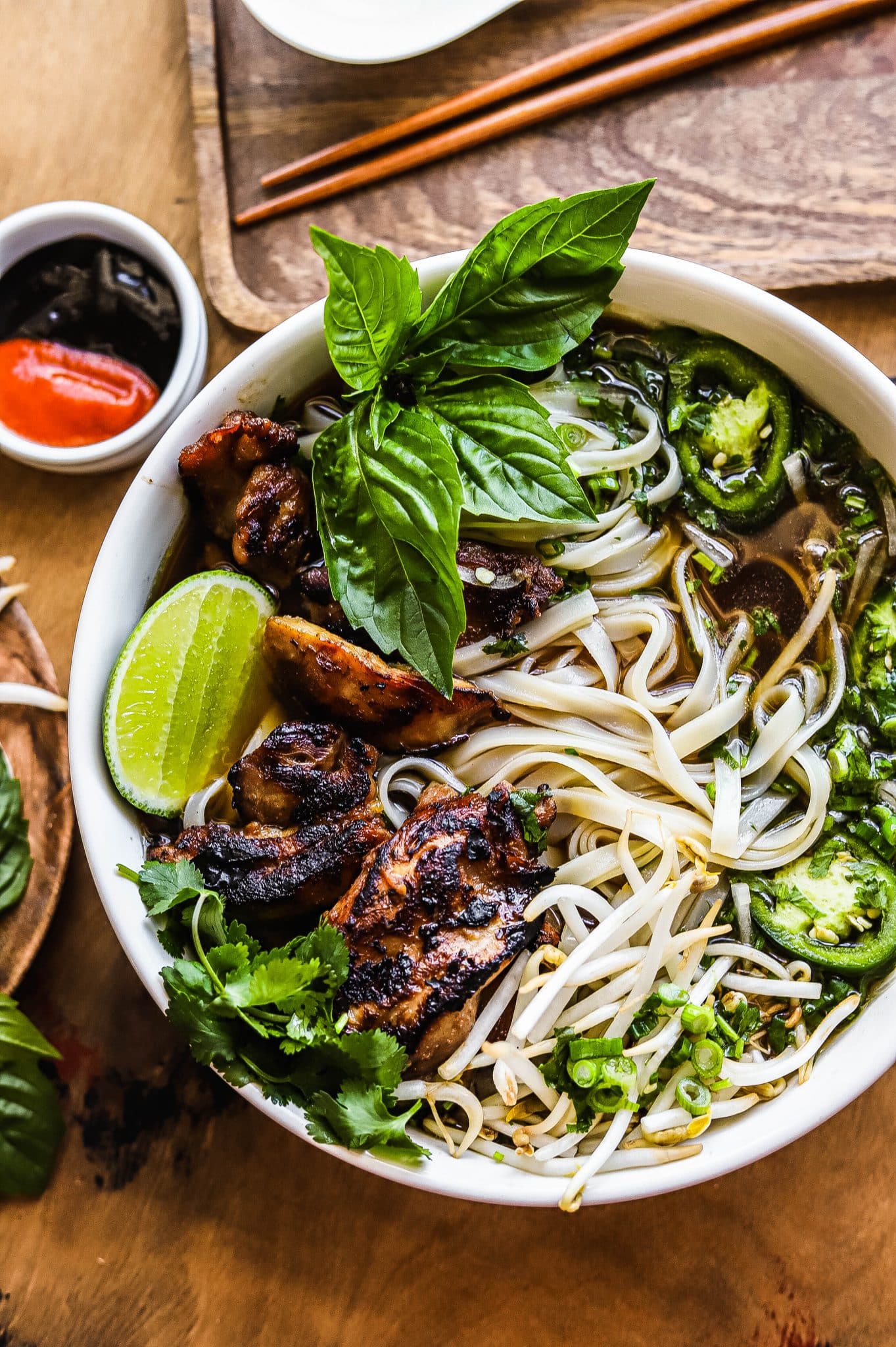 This Quick Chicken Pho-inspired soup is everything you love about pho but with some shortcuts to make it possible any night of the week! Chicken Pho is a nourishing and healthy, Vietnamese noodle soup. Rice noodles and aromatics are loaded into a bowl with flavorful broth and savory grilled chicken.

Pho is a dish that we love ordering out for! It’s one of my all-time favorite soups. So, I knew I wanted to recreate an abbreviated version that you can make at home. This is the final recipe for So Much Food Soup Week, and I definitely saved the best for last!

Pho normally takes hours to make, but this shortcut quick Chicken Pho is ready in just 90 minutes! While this may not be quick quick, it’s a shortcut to a really great bowl of Chicken Pho. By jazzing up store bought chicken broth, we save tons of time. I love the grilled chicken in this version of chicken pho. It adds a hugely savory flavor and makes excellent leftovers. I want to be clear that this recipe is not at all authentic, but this spirit and flavors of the recipe are meant as a homage to the iconic Vietnamese dish.

Pho, pronounced fuh, is an extremely popular and historic dish of Vietnam. It’s typically made with beef broth and meat that cooks in a flavorful broth with rice noodles and topped with a variety of fresh herbs. While most bowls of pho that you find in Vietnamese restaurants usually feature beef—beef brisket, thinly shaved rare beef, beef meatballs, and perhaps even tripe—you may also see chicken pho on the menu.

The origins of Pho are vague, but many believe that when the French colonized Vietnam, they brought their love of beef. In Vietnam, beef was not a prevailing protein as cows were used mostly for labor. With the influx of beef came an influx of beef bones which let to the production of rich beef broth.

Pho became popularized throughout the world by refugees after the Vietnam War. The Hanoi (northern) and Saigon (southern) styles of pho differ by noodle width, sweetness of broth, and choice of herbs and sauce.

I want to reiterate, this chicken pho recipe is not authentic. I am not Vietnamese and have no cultural background in Vietnamese cooking. When I set out to create this recipe, I wanted to make a recipe whose flavors paid homage to the original. If you are looking for an authentic chicken pho recipe, check out this recipe from Becca at Cooking Therapy.

Principles of a Great Bowl of Chicken Pho

This quick Chicken Pho recipe may take some shortcuts, but it still needs to be delicious! In order for pho to be great, it’s got to nail some principles.

The broth is obviously the star of the show! Traditional beef Pho takes hours and hours of simmering to make the ultra flavorful broth. To shortcut this step, we’re going to jazz up store bought chicken broth with roasted chicken wings and tons of aromatics and spices. An hour of simmering later and you’ve got broth that tastes nothing like the boring store bought stuff.

As I mentioned above, Pho is typically made with beef broth. The soup itself usually contains either brisket, rare steak, meatballs, or tripe. However, Chicken Pho is also a staple in many restaurants. I went to a Pho restaurant here in San Antonio and they offered the option of having grilled pork or chicken on top. I was blown away by the savoriness that the grilled meat lent to the soup. By all means, you can opt for chicken to simmer in the soup, but the grilled chicken is SO good.

Using the right noodles, bánh ph?, is essential to great pho! At your local Asian or Vietnamese market, look for flat, thin, rice noodles. They are flat in shape, white in color and smooth, soft, slippery and very slightly chewy in texture. They’re usually labeled as bánh ph?, or pho noodles. You can also find them on Amazon here. I’m always going to encourage you to visit your local Asian market before turning to amazon.

My favorite part of enjoying pho is piling on the toppings! Whenever you dine out at a Pho or Vietnamese restaurant, you’re presented with a plate piled high with bean sprouts, jalapeños or chilies, fresh herbs, and limes. You can also season your broth with the hoisin and sriracha usually found at the table. It’s a fun an interactive dish and I always keep this element when I serve Chicken Pho at home.

How to Make Quick Chicken Pho

You don’t really need anything special to make quick Chicken Pho at home. All you need is a large stock or soup pot, a sharp knife, and a skillet or grill pan.

*You can find all these ingredients at your local Asian or Vietnamese market. I encourage you to visit and patronize local businesses before buying ingredients on Amazon.

This is one of those recipes that I love to store if I’m going to make it! The broth and chicken freeze wonderfully, and I love having a stash in my freezer so I can make Chicken Pho whenever the craving hits.

To freeze Pho broth, cool the broth to room temperature and store in an airtight container. I love using these quart-size deli containers. It’s a holdover from my restaurant days and they are so great for storing food in. They’re perfect for freezing broth. Label and freeze for up to 6 months.

In the fridge, the Pho broth is good for about a week. ALWAYS store your broth and noodles separately. The noodles will get waterlogged and it’s not a great texture. If you have leftover noodles, toss them with a little oil and store in a ziplock bag in the fridge for up to 3 days. I usually prefer to make noodles fresh every time, so I tend to only make as much as I’ll need.

The grilled chicken will hold in the fridge in an airtight container for up to 5 days. Just reheat in the microwave before using. You can also freeze the cooked (or uncooked chicken in the marinade) chicken. Store in a freezer-safe ziplock bag, pressing as much of the air as possible out. Freeze for up to 3 months.

This Quick Chicken Pho-inspired soup is everything you love about pho but with some shortcuts to make it possible any night of the week!
Print Recipe Pin Recipe
Prep Time: 25 mins
Cook Time: 1 hr
Total Time: 1 hr 25 mins
Makes: 4 – 6 servings
scale: