How to make buttermilk cinnamon rolls

I love making giant buttermilk cinnamon rolls around the holidays, but they’re great any time of year. See below for special instructions on how to make this recipe without a stand mixer. 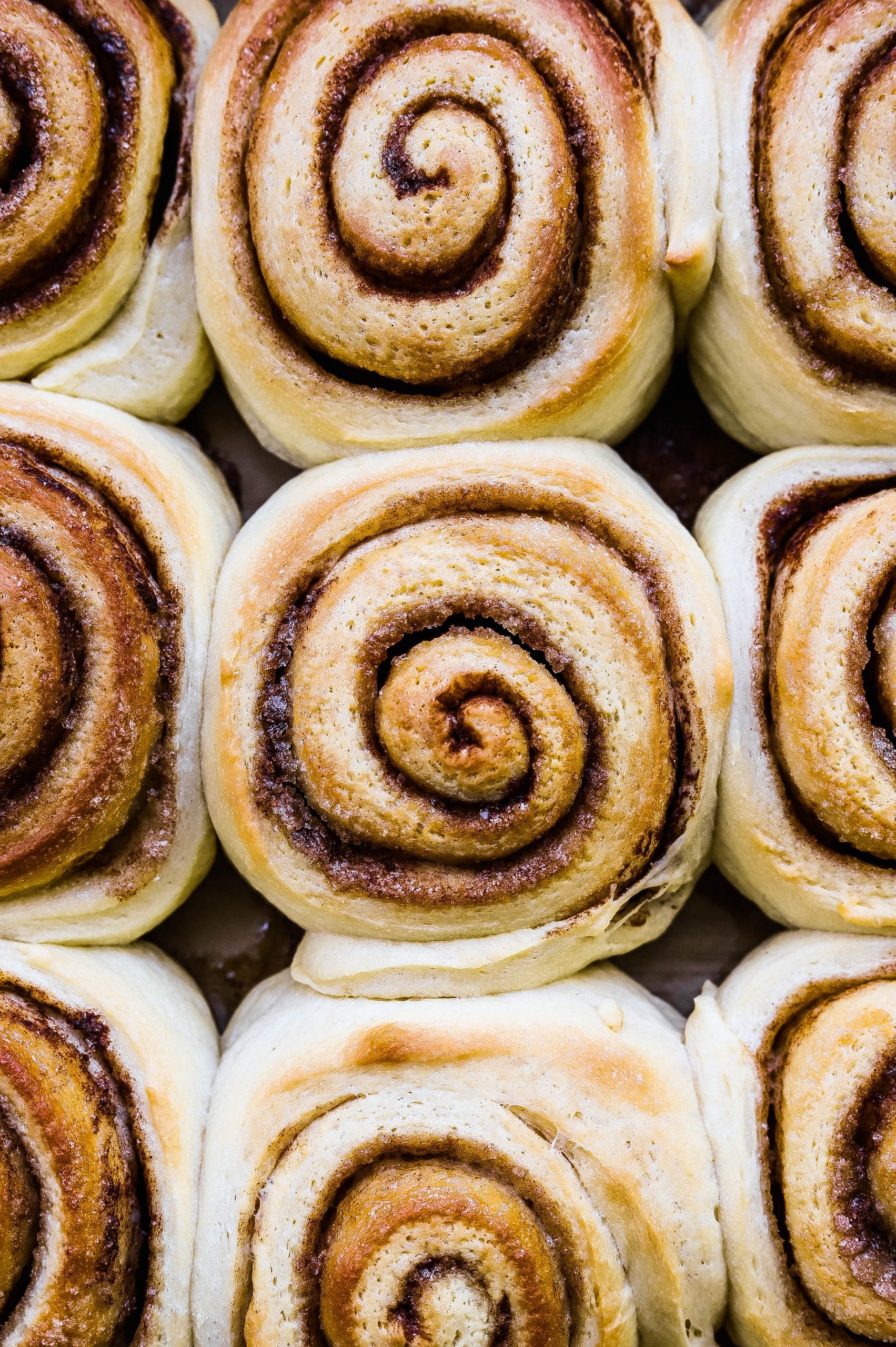 The crustier and chewier the bread, the less fat there is in the dough. This is known as ‘lean’ dough. Unlike BAGELS or CRUSTY SOURDOUGH, soft cinnamon rolls need fat making it a ‘rich’ dough. The cream, buttermilk, butter, and egg in this cinnamon roll recipe keep the dough nice and soft so don’t swap in any low-fat versions.

It’s time to ditch the knife and swap in unflavored dental floss! Unlike a knife, the dental floss cuts the roll from all sides at once keeping its shape.

If you have to use a knife, use a sharp one and cut the rolls using a back and forth sawing motion. Try not to cut straight down or you run the risk of the rolls being misshapen. This is purely for aesthetic reasons–these buttermilk cinnamon rolls will bake up fine either way!

For the floss, grab a piece about a foot long. Slide the floss underneath the roll and then drape both sides over the top of the roll, crossing over each other. Pull the ends tight to cut through the roll.

How to make buttermilk cinnamon rolls ahead of time

If you plan to make these for Thanksgiving, there’s already a lot going on! You may not have 3 hours to dedicate to one culinary project, so let’s talk alternate options.

You can prepare the dough, let it rise, roll it out and fill it, cut the rolls, place them on a prepared baking sheet, and then wrap them tightly in plastic wrap and refrigerate overnight. The next day, let the rolls rise on the counter, still covered, for about 2 hours, and then bake. Making these ahead of time can take some of the work off your plate on the day of.

Here’s how to freeze buttermilk cinnamon rolls: Follow the make-ahead instructions and instead of refrigerating overnight, freeze the rolls in a baking pan. Once frozen, they won’t stick together anymore and you can place them in a freezer bag. To bake: let them thaw overnight in the fridge on a baking sheet and then rise on the counter (covered) for about 2 hours, then bake. 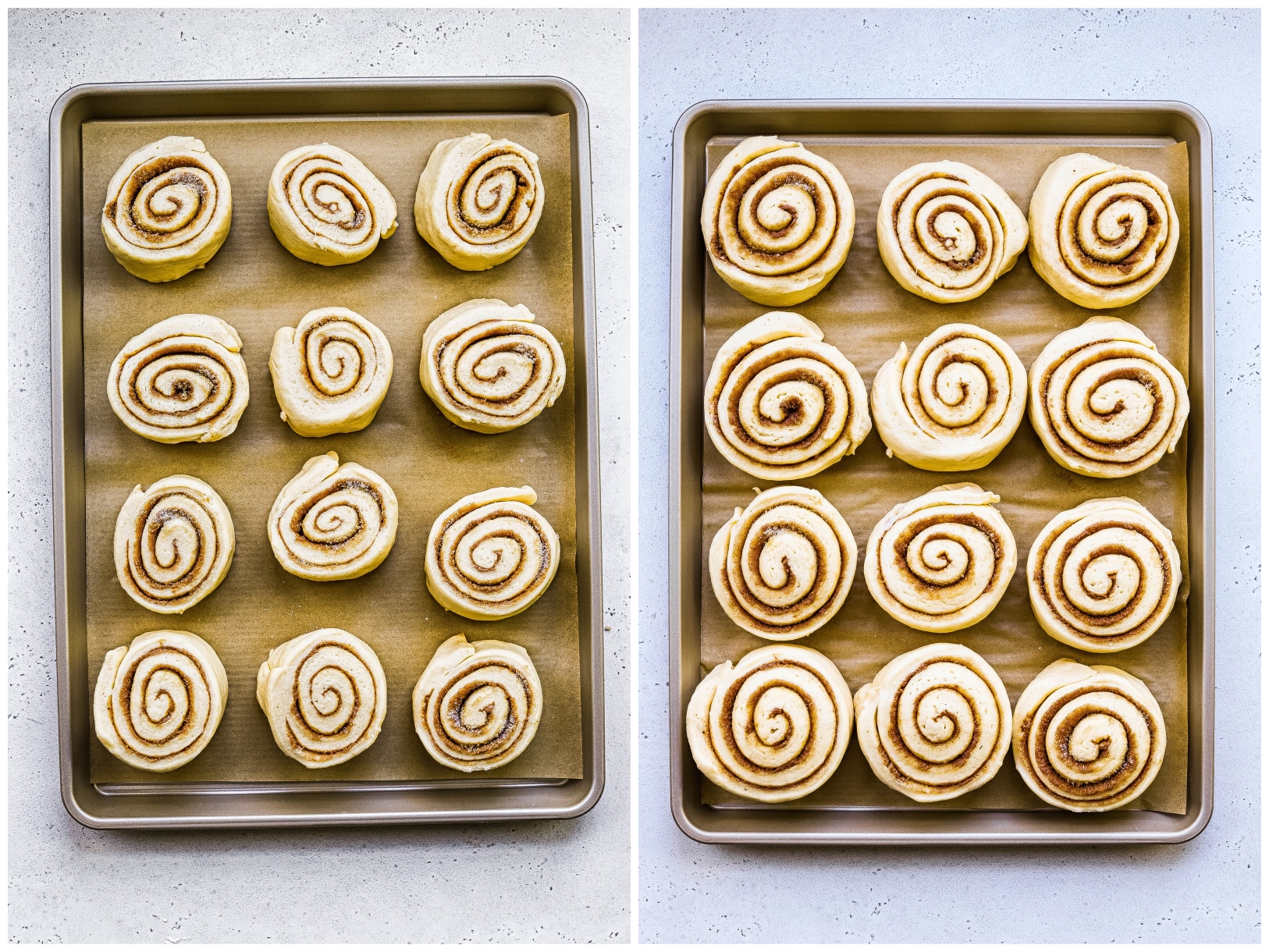 Making a smaller batch of this recipe

You can make this recipe into smaller cinnamon rolls for a smaller crowd very easily. Cut the recipe in half and bake the rolls in a 9×13 baking dish or baking sheet. You’ll only need to roll the dough into a 16×12 rectangle and cut it into 9-12 rolls.

how to make buttermilk cinnamon rolls without a stand mixer

I prefer to make these buttermilk cinnamon rolls in my stand mixer for ease, but they can be made without a stand mixer. Using a dough whisk, whisk the dough ingredients together in a large mixing bowl (follow the below instructions).

This is going to require a lot of elbow grease as this is a stiff dough. You’ll have to knead the dough by hand for at least 10 minutes, until smooth and elastic. 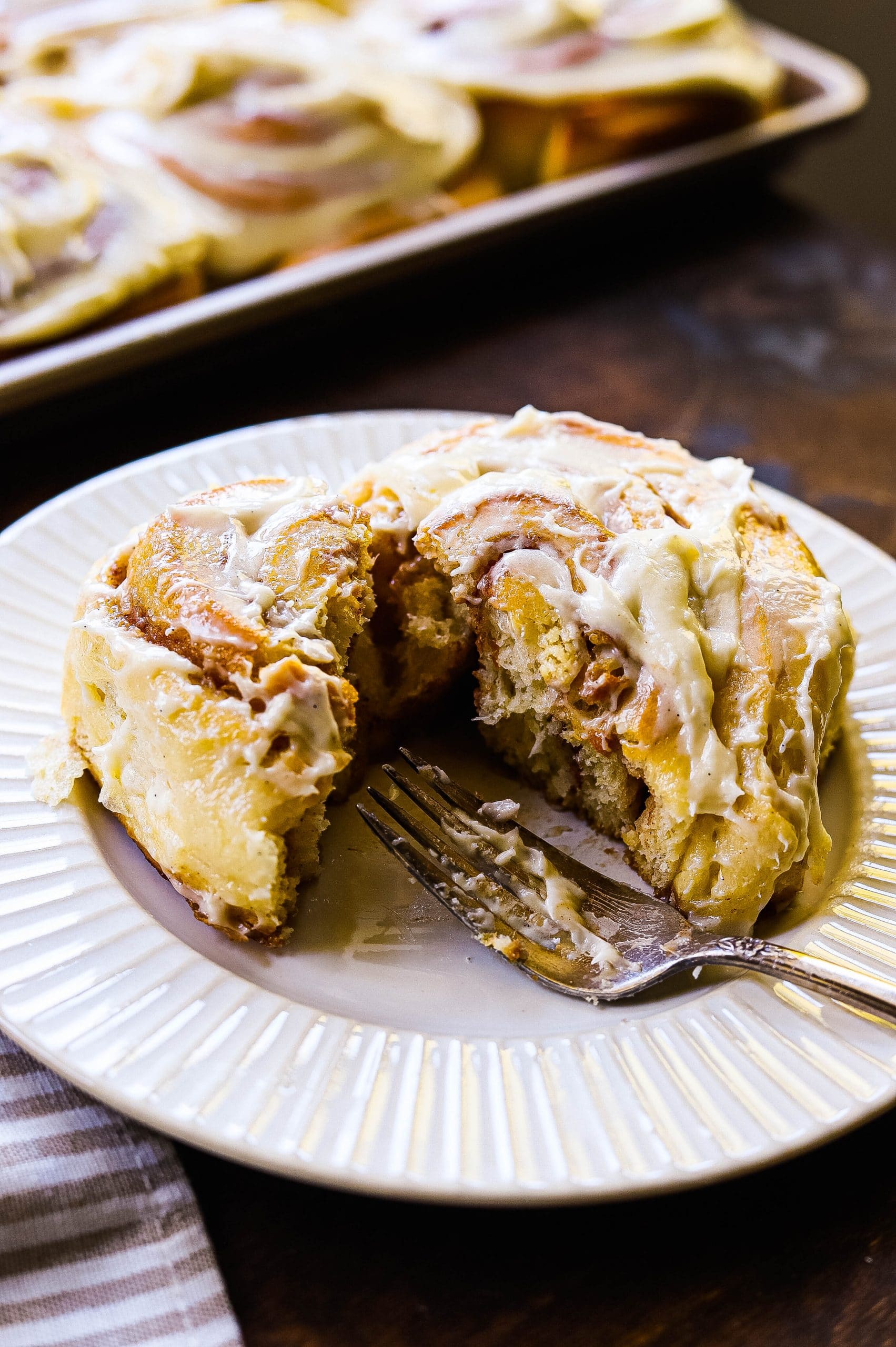 Other Breakfast and brunch recipes

This post contains affiliate links from which I receive a small commission at no additional cost to you. Affiliate links allow me to keep providing great recipes for free and I never recommend products that I don’t love and personally own.
Baking