Cherry season is finally here! That small, delicious window in which we can stuff our faces with tiny, rosy orbs. Eating cherries makes me think of feet up on the dash, driving with the windows down, letting the warm summer air wash over me as we leave the market. I start snacking on cherries as soon as we get in the car, spitting the pits out of the window (don’t judge me). When I think about pies, cherries are the only fruit that I think of. Sweet and tart, they keep pies from getting overly sweet and pair perfectly with ice cream. Chamomile-crème fraiche ice cream is one of my restaurant greatest hits. I developed it to go with an apricot financier cake and when we started offering ice creams by the scoop, this one stuck. It is just the slightest bit floral with tons of honey notes and the crème fraiche adds just the tiniest bit of tang. I could happily eat a bowl of just the ice cream topped with cherries but the combination of the cherries, pie crust, toasty hazelnuts and ice cream really is something magical. 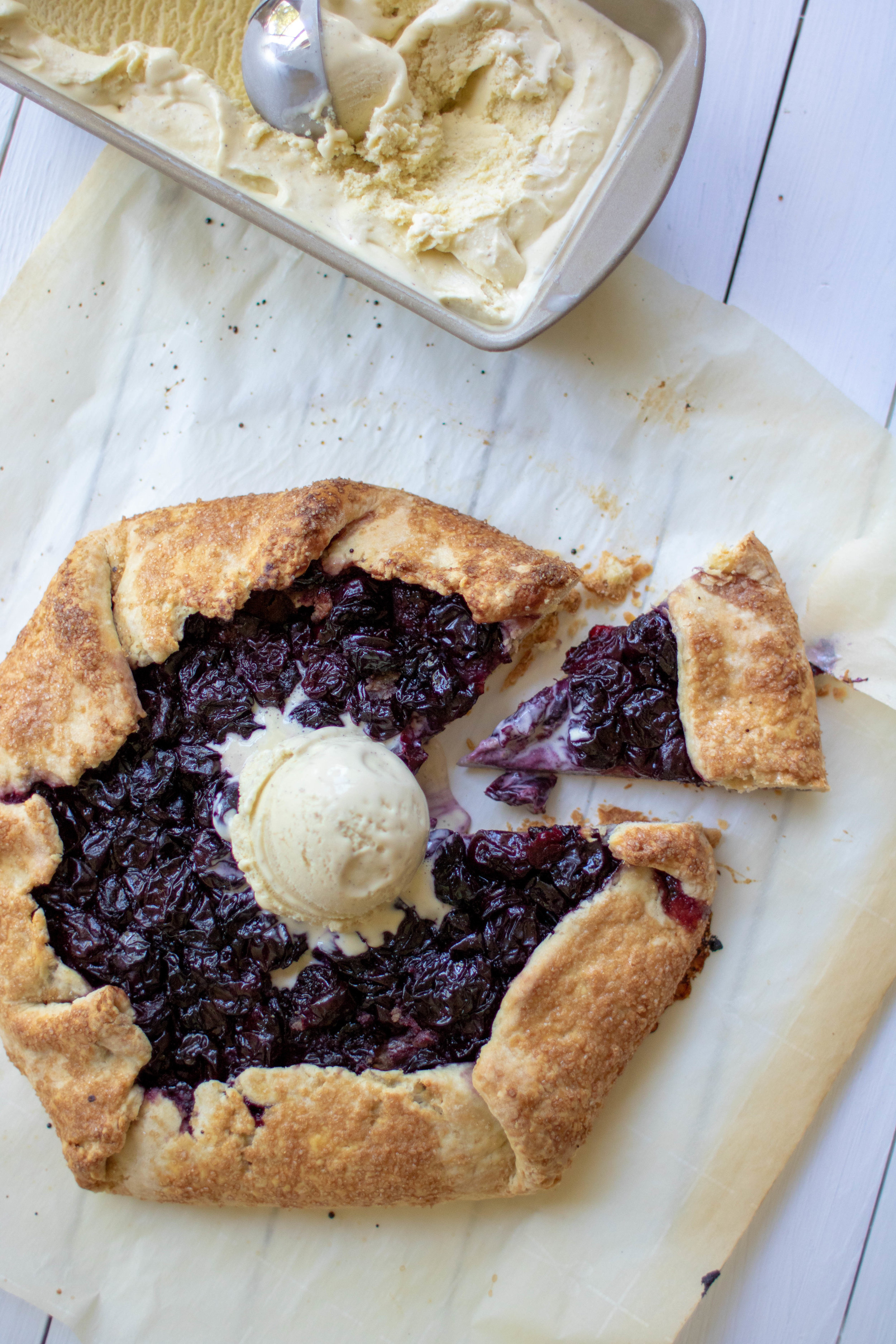 I have never been a particularly adept pie maker. It’s just one of those desserts that I make so infrequently that getting the crust just right is incredibly challenging for me. Not to mention the fact that there are about 983493245 different schools of thought on pie dough in general. Butter? Lard? Combination? Ice water? Vodka? Vinegar? Different flours? Egg or no egg? Who knows? It’s all a crap shoot. Being that I have very few convictions about pie dough and in the interest of science, I decided to roll the dice and blend a bunch of different methods. I opted for butter over lard (flavor), an egg, and a mix of ice water and vodka for my liquid. I attempted the dough a couple of times before the consistency was right. I am almost always guilty of adding too much liquid to pie dough and then it becomes gummy and then unmanageable and then it goes into the trash. Live and learn, I guess. I am not of the school that believes in using a food processor for pie dough. I think it’s too easy to over-mix the dough and you lose the large dots of butter for a more homogenous mixture. I like to use my hands to work the butter into the dough, or during the summer I use a pastry blender to keep the butter from melting. If it’s dead summer, sometimes I even chill the flour and butter in the freezer for a bit before blending them together. The goal is to end up with a shaggy looking dough that you knead until everything comes together. 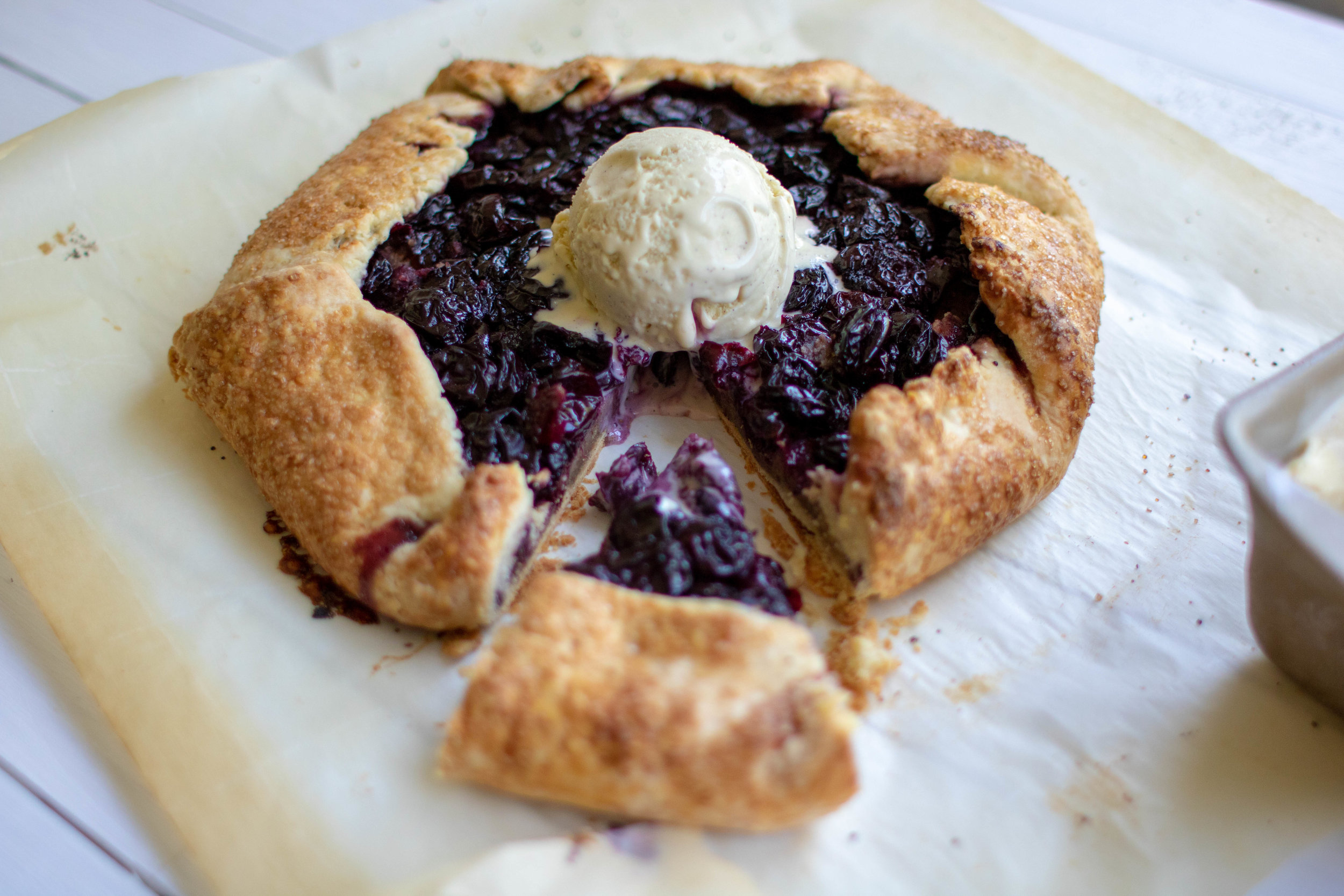 I’m such a huge fan of the galette because it’s basically low stakes pie making at its finest. I don’t have to make fancy braided lattice work that inevitably cracks and falls apart but not before I end up wanting to pull my hair out. It’s the stoned surfer of pie making. Like, it’s so chill, bro. Who cares if it’s ugly? It’s rustic. I love that word. It’s the colloquial euphemism for “this looks a little bit like shit, but I’m going to roll with it anyway.” It still tastes delicious. I can get behind a dessert like that. Minimal risk, high reward. Just slap everything together, throw it in the oven and voilà . Sub in your favorite fruit if cherry isn’t your jam, that’s the beauty of pies and galettes. Everything is super customizable.

In a medium mixing bowl, mix together flour, salt, and sugar. Place bowl in the freezer for 15 minutes. Add diced butter and egg to flour and using a pastry blender, mix until butter is in pea-sized pieces and the dough just sticks together if you squeeze it in your hand. Mix together water and vodka with ice in a small bowl. Start by adding 4 tablespoons. Mix the dough until all the liquid is incorporated. If the dough is still dry, add 1 tablespoon at a time, mixing between each addition, until the dough is shaggy and just coming together (it took me 5 tablespoons, for reference). Turn the dough onto a floured surface and knead until dough has come together and is no longer shaggy. Press dough into a disc shape, wrap in plastic and chill in the fridge for 2 hours.

In the meantime, Preheat an oven to 375 degrees F. Place hazelnuts on a sheet tray and toast in the oven for 5-7 minutes, until golden brown and fragrant. Remove hazelnuts from the oven and let cool for 5 minutes. Add hazelnuts to the bowl of your food processor. Add sugar, vanilla, salt and egg and process until a very thick paste forms (you may have to pause and scrape down the sides of the bowl). Set aside frangipane until ready to use.

Line a baking sheet with parchment paper. Remove dough from the fridge and flour your work surface. Roll the dough into a large circle (about 16 inches), turning the dough frequently to keep it round. If the dough cracks, that’s a-ok–just smush it back together with your fingertips. Gently lift the dough and place it onto the lined baking sheet. Spread the hazelnut frangipane onto the dough in a 12 inch circle, leaving about two inches all the way around the dough. Top the frangipane with cherries, keeping the cherries in the circle of hazelnut frangipane.

Carefully fold up the edges of the dough around the filling, leaving an opening in the middle. Don’t worry if it looks a little rough, remember, it’s rustic. Whisk together egg and cream and brush the pie dough with it. Top the dough with a sprinkling of raw or turbinado sugar. Throw the galette in the oven and bake for 40-45 minutes, or until dough is golden brown. Cool before slicing, top with chamomile-crème fraiche ice cream.

In a medium sauce pan, mix together milk, heavy cream, chamomile flowers and vanilla. Warm gently over medium heat until just barely simmering. Turn off heat and set aside. The recipe is best if infused overnight, but infuse for at least 1-2 hours. Strain milk mixture through a fine mesh sieve, pushing on the chamomile to get all the liquid out and squeezing the vanilla bean pods to get all the seeds out, and return to a sauce pan over medium heat. Discard the chamomile and vanilla.

Whisk together egg yolks and sugar in a mixing bowl until thick and pale yellow in color. Whisk 1/2 of the warm cream mixture into the eggs taking care to whisk constantly while doing so*. Whisk egg mixture back into the rest of the cream in the sauce pan (scrape all the egg and sugar from the mixing bowl into the pan) and return to medium-low heat. Cook, whisking constantly, until thick enough to coat a wooden spoon, about 5-7 minutes.

Strain through a fine mesh sieve into a medium bowl set over a bowl of ice water; let cool, stirring occasionally. Fold crème fraiche into the ice cream mix. Process custard in an ice cream maker according to manufacturer’s instructions. Transfer to an airtight container; cover. Freeze until firm, at least 4 hours and up to 1 month.

* this technique is referred to as tempering. You are gradually adding hot liquid to egg yolks to bring the temperature up slowly without turning them into scrambled eggs. If you were to immediately add the eggs to the warm cream, your eggs would scramble. The goal is to get them warm enough to be able to add back to the cream mixture without them overcooking.